Real story of bailout exit is how good crisis was wasted 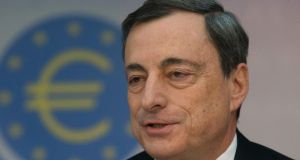 ECB president Mario Draghi: has promised to do whatever it takes to keep the euro together. Photograph: Ralph Orlowski/Bloomberg

There is no such thing as a good bailout – it is an oxymoron – but that has not not stopped us claiming whatever kudos were going over the past three years. To paraphrase the Taoiseach, we have become the best small country in the world in which to do bailouts by 2013.

This is not nearly as pathetic as it seems. Our ability to meet pretty much all the conditions of the bailout has done much to restore international confidence in Ireland and its institutions. Making a virtue out of this necessity was the obvious and correct strategy.

Our partners clearly understood this and played their part. First by allowing the Government play down their quarterly visits, which were the physical manifestation of our surrender of control. The troika was also careful not to rub our noses in this embarrassing mess whilst being quick to praise us when they could.

Their actions were informed by enlightened self-interest. Undermining the already fragile and battered Irish political establishment was not a smart move if they wanted to get their €45 billion back.

It is this sort of pragmatism presumably which is behind the troika’s willingness to let the Government make such a song and dance out of whether or not to take a formal contingent credit line from the troika when the programme ends in a few weeks.

You only have to look at Irish bond yields to conclude that this is very close to much ado about nothing. The people who have lent us money and whom we will need to borrow more money from seem unmoved by the will-we won’t-we? drama playing out in front of them.

This is presumably because they know – as does pretty much anyone who has followed the events of the past few years – that if things do not go well over the next few years for Ireland an additional funding line can be arranged. The source of the funds and framework to deliver them now exists in the form of the European Stability Mechanism. The markets also know Ireland will be subjected to a very high level of external supervision for as long as it remains in the euro as a result of the fiscal compact and all the other Governance reforms brought in post crisis. There will also be additional surveillance associated with our borrowings from the IMF. Finally, there is pledge of the president of the ECB, Mario Draghi, to do whatever it takes to keep the euro together.

So why all the fuss over the precautionary funding line? It would seem at best to be a marginally important issue as we exit the bailout. But it has been made a central issue – if not the central issue – and taken on an importance that is hard to justify.

The narrative that has been promulgated over the past few weeks is that the troika are trying to force us to take the precautionary funding line and in the process make us submit to at least another year of intrusion into our affairs.

However, the story goes, such is the determination of the Government to regain Ireland’s sovereignty they are prepared to stand up to the troika, refuse to take the precautionary funding line and bravely go it alone.

Divert attention
It’s a nice story and allows us extract some sort of victory out of the ending of one of the sorriest chapters in the history of the State. The troika seem prepared to play along – or at least not burst our bubble – but occasionally the mask slips and their indifference becomes visible.

Asked about it last week, Draghi said the ECB, the European Commission and the IMF “would say that certainly it would be useful to have a precautionary programme in place”. You could spend a lot of time pondering what Draghi means by useful or you could take it at face value; they think we should take one but it’s really our call.

The closer you look, the more the whole precautionary credit line issue looks like a ball of smoke from which the Government is cleverly mining a political victory. It also serves to divert attention from the fact that, after the best opportunity in a generation to push though reforms, the health service remains in chaos, social welfare continues to disincentivise work; professional fees remain stupidly high; the banks don’t work and hundreds of thousands continue to struggle with debts that they can’t pay.

The real story of the end of the bailout is not the contingent credit line; the story is how a good crisis appears to have been wasted.