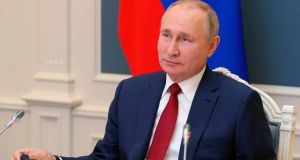 Russian president Vladimir Putin speaks to participants at the the Davos World Economic Forum via a video link in Moscow.

Russian president Vladimir Putin has warned that the world risks an “all against all” conflict if global development concerns are not addressed.

Mr Putin hailed his agreement with US president Joe Biden, announced on Tuesday, to extend the New Start treaty capping the number of nuclear warheads held by both countries, as “a step in the right direction”, but said “controversies are spiralling”.

“There is a chance to face a real setback in global development, which is fraught with a fight of all against all and attempts to resolve looming controversies through a search for internal and external enemies,” Mr Putin said in a video conference speech to attendees. “The situation might develop unpredictably and uncontrollably. It definitely will if nothing is done to prevent this.

“Of course, I hope that such a hot global conflict is impossible in principle now. I really do hope so. It would mean the end to our civilisation.”

The theme of global destruction and a potential third world war has become a common one in Mr Putin’s foreign policy speeches in recent years. His Davos speech did not include references to new weapons being developed by Russia, such as a hypersonic nuclear missile and a long-range nuclear-armed torpedo, which he often boasts of when speaking to a domestic audience.

Mr Putin also questioned the power of technology giants, making a pointed reference to the role played by social media companies in the recent US election and its aftermath.

“These are no longer just economic giants. In some areas, they are already de facto competing with the state,” Mr Putin said. “Society has a question to ask what extent such a business monopoly corresponds to the public interest?”

Later in the day, Benjamin Netanyahu, prime minister of Israel, which has raced ahead of other nations in inoculating its citizens against Covid-19, warned that the world should be prepared for a long race between constantly tweaked coronavirus vaccines and the mutating virus.

“It’s just a question of time before we hit a strain that the current vaccines” won’t work on, said the Israeli prime minister, explaining his decision to shut down the country’s main international airport, and seal its land border for the foreseeable future.

Israel has extended its third national lockdown after a surge in infections triggered by the B.1.1.7 mutation first identified in Britain.

“We expect the companies manufacturing the vaccines to modify their vaccines to accommodate the mutations as they develop,” said Mr Netanyahu. “That’s going to be our life for the coming years.”

South Korean president Moon Jae-in touched on the economic fallout from the health crisis during his speech earlier on Wednesday. He said inequality was worsening not only within countries but also between nations, as a result of the pandemic.

But the leader of Asia’s fourth-largest economy also struck a more positive note, proposing that his country’s plans to encourage businesses prospering during the pandemic to share profits with those less fortunate could be a model for the world to follow.

“My administration and the legislature are also discussing a profit-sharing system in which the government provides strong incentives to companies that have prospered during the Covid-19 pandemic to share their profits with their hardest hit peers,” said Mr Moon.

“More wisdom will be needed to work out the details, but if these initiatives can be realised they can become a benchmark for inclusive policies to be used in overcoming future pandemics together.”

While the coronavirus crisis has been the focus of much of the event so far, many of Wednesday’s discussions at the WEF shifted their focus to climate change.

Bill Winters, chief executive of Standard Chartered, said that although many businesses had communicated net-zero emission pledges, few of them had outlined how they would implement or measure them.

“Ultimately there is going to have to be some facility for people to get to net zero by transferring money to other people who are able to actually remove carbon from the environment, which may not be the businesses that we run,” he said. – Copyright The Financial Times Limited 2021