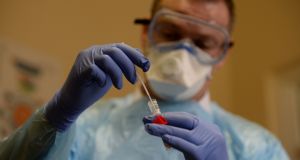 Having risen in December, the KBC Bank sentiment index dropped nine points to 64.9 in January.

“In light of the sharply increased incidence of the virus and a related increase in health-related restrictions, it is scarcely surprising that consumer confidence tumbled in January,” said KBC Bank Ireland economist Austin Hughes.

“Although the drop in sentiment in Ireland was clearly larger than in many other economies, it can still be argued that the decline here may be somewhat smaller than might have been feared,” he said.

“It could be that expectations of the rollout of vaccinations coupled with a greater economic capacity to live with the virus acted to curb the extent of the fall in Irish consumer confidence in January,” Mr Hughes said.

The current level of the sentiment index was in line with the average of the index through 2020 (65.0) but remains above the levels recorded each month between April and October. So, it may be reasonable to suggest that sentiment slid rather than slumped in January, Mr Hughes said.

The drop in Irish consumer sentiment in January was relatively large in comparison to that seen in other countries. In the United States, the comparable indicator slipped from 80.7 to 79.2, for the euro area the fall was 1.7 points to -15.5 and in the UK -28 from -26.