Planet Business: alternative facts and a dash of Musk 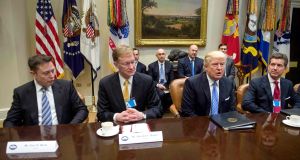 Image of the week: Mission to Mars

The man second from right is the president of the US, apparently – so they say – while the man on the far left is Tesla founder and chief Elon Musk, one of the business executives who trooped along to the White House this week. The visit, which follows one earlier this month to Trump Tower, didn’t seem to do any harm to Tesla’s share price on Monday. But it is Musk’s role as founder and chief executive of SpaceX that is beginning to seem increasingly important, for there are few subjects that arouse Musk’s passion as much as his ambition to one day colonise Mars. For reasons not unrelated to the man on the second-right, the time has now come to be abundantly clear (in case there has been any misunderstanding on this subject to date) – take us with you, Elon. Please?

Number of new copies of George Orwell’s 1984 set to be printed by Penguin, which said this was “substantial” and larger than its usual reprint for the book.

Number of print copies of 1984 sold in the US since November’s election, according to Nielsen BookScan, which measures most book sales in the US. This was up 11,000 on the same period the year before.

The lexicon: TPP 12 minus one

In the manner of invited guests determined to go ahead with their party plans despite a late cancellation by the householder, Australia and New Zealand say they would quite like to press on with the Trans-Pacific Partnership (TPP) trade deal despite the White House’s decision to formally withdraw the US. What was a US-led, 12-nation agreement, set to cover 40 per cent of the world’s economic output, is now being dubbed “TPP 12 minus one” in Australia. Its trade minister, Steven Ciobo, said Australia would not abandon the TPP just because it would require “a little bit of elbow grease” to keep it alive. But also, would any other countries like to join in?

Getting to know: Chase Carey

Chase Carey, the new chief executive of Formula One, is known for his trademark handlebar moustache which, according to the Financial Times, hides a scar picked up from a car accident in his university days. The man installed by Formula One’s new owners Liberty Media to replace Bernie Ecclestone has, for much of his career, been the right-hand man of Rupert Murdoch, whose 21st Century Fox / News Corp empire is a rival to John Malone’s Liberty. But when Murdoch’s son James was appointed 21st Century Fox chief executive a couple of years ago, the time came for Carey to move on to pastures new. Believing “some elements of Americanisation” could benefit the sport, his next task is to popularise Formula One in the US. It’s not exactly in pole position right now.

Reached the end of your political career? Why not step sideways into a well-remunerated, low-stress “advisory” gig with a very large bank? Mind you don’t bump into this lot in the gold-plated lift:

Shortly after leaving office in 2008, Blair found himself joining JP Morgan Chase, having been deemed “enormously valuable” to the firm.

Shakira’s best mate and successor to Blair sits on the global advisory board of Pacific Investment Management (Pimco), where he may have the opportunity to hang out with former Fed chairman Ben Bernanke.

The former European Commission chief made a much-criticised move to Goldman Sachs, advising its clients on thorny Brexit issues. An ethics panel cleared him in October of breaking an EU integrity code over his choice of employment.

The former British chancellor is now an adviser to BlackRock, the world’s largest asset manager. But he still wants to be prime minister, right?

1 US ‘hard seltzer’ drink White Claw launches in Ireland
2 Citigroup warns that markets are out of step with reality
3 Chris Johns: Past is another country when it comes to our post-pandemic future
4 ‘I’m so lucky to be in the Caribbean – a million miles from Derry Girls’
5 Should my mam wait for house prices to drop before buying?
6 ‘The recovery needs to be a full-scale economic renewal’
7 How to . . . use Snapchat’s new Snap Map - and how to turn it off
8 People ‘overloaded’ by social media more likely to believe false stories
9 Joint accounts: if one of us dies, can the other access the money?
10 HSBC board rethinks overhaul and seeks even deeper cuts
Real news has value SUBSCRIBE