This week: Bee-conomics, smart rupees, Vatican clean-ups and ‘the Everything Boom’ 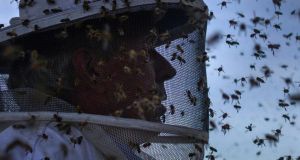 Image of the week: Plan Bee

In classic “rather him than us” mode, beekeeper Robert Harvey is seen heresurrounded by Italian honey bees as he transfers bee colonies from a blueberry field near Columbia Falls in Maine in the US. The White House recently adopted a federal strategy to reverse the rapid decline of pollinators, warning that the “economically unsustainable” death rate of honey bees is threatening the development of billions of dollars of crops.

Meanwhile, a lawsuit has now been filed by US environmental groups seeking an injunction restricting the approval of a controversial class of pesticides known as neonicotinoids, or “neonics”, amid concerns they are harming bees. The White House says honey bees add more than $15 billion in value to US agricultural crops each year, which is just another reason to be as nice as possible to them. Photograph: Adrees Latif/Reuters

Number of “smart cities” that the government of India plan to create, with 70 billion rupees (€850 million) set aside for the project in its budget this week.

Sum that India spends each year on food and fuel subsidies. Prime minister Narendra Modi’s government intends to reduce this figure, in an overhaul of the system designed to make subsidies “more targeted”.

India’s annual defence spending will increase 12 per cent to this amount in a bid by the government to modernise its military. India has been the world’s top buyer of arms for the last three years.

The lexicon: The Everything boom

The “Everything Boom” is the coinage of Neil Irwin of the New York Times, who came up with the term this week on the newspaper’s investment outlook blog The Upshot. Irwin’s worrying thesis is that “nearly every major asset market on earth is currently expensive by historical standards”: stocks and bonds; emerging markets and advanced economies; urban office towers and Iowa farmland.

“You name it, and it is trading at prices that are high by historical standards relative to fundamentals,” he writes. “Welcome to the Everything Boom – and, quite possibly, the Everything Bubble.” The breadth of high valuations, Irwin concludes, “brings obvious economic risks”, one of which is that busts in one or more markets “could create a new wave of economic ripples in a world economy still not fully recovered from the last crisis”.

Getting to know: Jean-Baptiste de Franssu

French businessman Jean-Baptiste de Franssu is the new head of the Institute for Works of Religion (IOR), which is more commonly known as the Vatican Bank. His task is to separate the bank’s investment business from its Church payments work and do a general clean-up after decades of scandal that includes money-laundering allegations and tax evasion.

So what qualifies him to be God’s banker? The 51-year-old is the former head of European operations for the investment management company Invesco and he has also been serving on an economic advisory council set up in March by Pope Francis himself. Australian Cardinal George Pell, head of the Vatican’s Secretariat for the Economy, says it must become “a model of financial transparency”. It’s a big job for a layman.