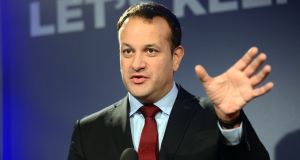 Taoiseach Leo Varadkar at an announcement of plans to abolish the USC by 2020 as part of Fine Gael’s long-term economic plan. Photograph: Dara Mac Dónaill / The Irish Times

The Government’s long-promised plan to merge the universal social charge (USC) and the Pay Related Social Insurance (PRSI) could result in a loss of over €1 billion in tax revenue to the exchequer and is likely to prove extremely complex to implement, a high-level report has warned.

The report by a working group of senior Government and Revenue officials, published alongside the Government’s budget documents, considered nine possible ways of amalgamating the two tax codes.

It concluded, however, there was no one approach that was “simple in design and implementation” and that minimised the costs to the State while avoiding “winners and losers” at the income earner level.

The most detailed examination was given to the full amalgamation option as this mostly closely matched the Government’s preferred option.

This would see USC, which nets the Government €4 billion a year in tax revenue, abolished in favour of increased rates of PRSI.

The working group considered various ways this option could be achieved. However, all but one involved a signficant loss for the exchequer of between €617 million and €1.08 billion.

This was because existing exemptions under PRSI, such as those for people aged over 66 or self-employed persons, would apply to income previously-taxed under USC.

They would also either prove to be progressive, penalising middle-to- high income earners, or regressive, hitting low earners more.

The report said those aged over 66 and self-employed persons earning over €100,000 would stand to benefit from a significant windfall gain - thought to be in region of €310 million per year - without any policy to mitigate such an impact.

The report also considered partial amalgamation, involving some reduction of USC and an increase in PRSI, and a new charge option, where both the USC and PRSI are abolished in favour of a completely new levy.

In addition, the group assessed an alternative amalgamation option, which would see USC merged with the income tax system, with PRSI left unchanged.

While “technically feasible” there are a number of possible options to achieve the proposed amalgamation, the report said, while noting all had varying levels of complexity, costs to the State and trade-offs at the taxpayer level.

“All possible options or variations therefor involve trade-offs between these three factors and raise significant parallel policy choices for Government as well as the resolution of practical implementation issues which arise,” it said.

The plan to merge USC and PRSI, first floated by Taoiseach Leo Varadkar in 2017, marked a move away from its previous commitment to gradually abolish the USC, which was brought in as an emeregency measure in 2011 in the wake of the crash.