Bomb attacks by Isis and separatists, currency woes and coup all contribute to woes 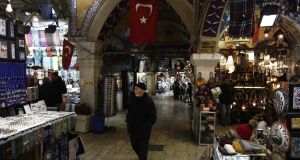 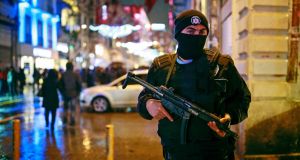 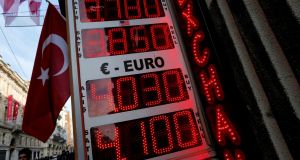 A digital display showing currency exchange rates for the US dollar and Euro against the Turkish lira at a currency exchange office in central Istanbul, Turkey January 12th, 2017. Photograph: Murad Sezer/Reuters 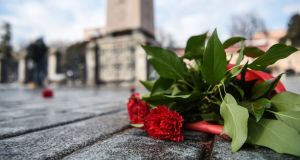 Istanbul’s historic Grand Bazaar was once the trading heartbeat of the entire Ottoman empire, but today it tells a different story.

Shop fronts that were only months ago lit up by gold jewellery or colourful rugs now lie empty. Armed police and x-ray machines guard each entrance to the market, home to thousands of shops and stalls.

The baying currency traders who have been a mainstay of the Grand Bazaar’s most off-the-beaten-track back streets for decades, are now uncommonly quiet and few in number even as, last Friday, the US dollar-Turkish lira exchange rate hit uncharted territory at 3.60 lira to the greenback.

This week, there is just a single trader blaring down his phone; the rest are sitting around an electric heater or staring at their phone screens. This week, the lira – rising to 3.89 lira to the dollar – was losing value so quickly that by Wednesday morning it made Twitter’s worldwide trending list.

Despite having overcome an attempted military coup and being home to some of the fastest growing cities in the world, 2016 was a disaster for the Turkish economy.

In addition to deepening currency woes, security threats and attacks scared off visitors following the killing of 12 Germans and a Peruvian at a popular tourist site in Istanbul 12 months ago.

City centre bombing campaigns by Isis and Kurdish separatists and the June attack on Ataturk airport that killed 45 people have all contributed to effectively closing the country’s international tourist trade for the year.

It didn’t end there. In the shadow of July’s blundered military coup, Turkey has become the world’s worst-performing emerging economy, with the lira outdoing even the Mexican peso, posting record weakness against the dollar in successive weeks this month and last. And the new year is shaping up just as bad as 2016.

“We’re buying 45-50 per cent less gold today and we have a 70-80 per cent fall in Western customers compared to 2014,” says Yusuf Gundogmus, the proprietor at Elmas jewellery, a mainstay of Istanbul’s Spice Bazaar for the past 45 years.

“Around 60 per cent of our customers are Turks, but they are spending 20 per cent less now compared to 2015. People turn on the TV and see the dollar going up, see the price of gold going up, and think ‘I can’t buy anything right now’.”

Appealing to raw nationalism did help stem the tide for a time early last month: President Recep Tayyip Erdogan, a hugely popular leader among swathes of Turks, called on “those who keep dollar or euro currency under their mattress” to cash in their foreign currency holdings for lira and gold to defend the national currency, which they did to the tune of €11 billion.

Imports of gold rose 688 per cent compared to the same month a year earlier.

Turkey’s demographics mean that household and consumer spending are set to remain strong.

The central bank in November raised interest rates, also providing some relief, and an additional, emergency hike by a significant amount is expected again soon.

Moreover, some of Turkey’s troubles are beyond its control. The election of Donald Trump and the strengthening of the dollar on the back of an interest rate hike in the US in December for only the second time in a decade, has hit emerging economies hard.

An economic adviser to President Erdogan this week claimed there are strenuous efforts by elements outside the country to destabilise its economy.

“The forex demand is very shallow, highly speculative and originates from abroad. This is happening when the Turkish parliament has started to debate the constitutional amendment [to allow President Erdogan full power],” Cemal Ertem told Turkey’s state news agency.

“We have seen a campaign in a bid to depreciate the lira in a rapid manner. This is not a conspiracy theory, but an obvious fact.”

Yusuf Gundogmus, the jeweller and an AK Party supporter, agrees. “We’ve seen it clearly around the world that there are powers that are trying to advance their interests against Turkey.

“The Obama administration did a lot of damage to the region – arming Kurdish groups, stopping and starting the fight against Isis in Mosul for unknown reasons,” he says.

Worryingly, however, analysts see no reason to believe the economy will turn around over the coming weeks or months, in part because of the level of political interference in the central bank, and the broader decline in security. Last month saw Turkey’s economy contract, albeit by less than 2 per cent, for the first time since 2009.

“The current cycle of negative news for the economy looks hard to break – both domestically and in terms of the outlook for rising global interest rates. Emerging markets will need a compelling story to convince investors to buy in this environment, and right now Turkey lacks anything close to that,” says Gavin Serkin, founder and managing director of the Frontier Funds Consultancy.

With a referendum on changing Turkey’s constitution to allow President Erdogan full power not expected to take place until late spring, once its proposal first hurdles a weakened opposition in parliament, as expected, more trouble lies ahead.

A Fitch sovereign rating review on January 27th is likely to see Turkey downgraded from its BBB- status, a position it held on to even after the failed coup.

Gundogmus says he has little option but to be positive about the future.

“It depends on what happens in Washington after [Donald Trump’s presidential inauguration on] January 20th. You have to hope things get better,” he says.

“The expectation is that Trump will take the chair and things will settle down a little.”

Others are more circumspect. “In any other country, hiking rates at this point would be a textbook certainty, but this isn’t any other country and Erdogan long ago rewrote the policy textbook. Ultimately, there will be no choice but to hike interest rates,” says Serkin.

“The only question is how long – and how much damage – it takes to get there.”