Project cannot be a ‘dialogue of the privileged’, stresses Minister for Finance 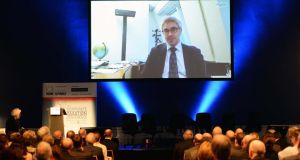 Pascal Saint-Amans, director of the Centre for Tax Policy and Administration OECD, addressing delegates via skype: At the conference Minister for Finance Michael Noonan said plans to reform the global tax system must not be used to create advantages for larger countries. Photograph: Eric Luke/The Irish Times

Addressing a conference in Dublin, he said Ireland overwhelmingly supported the Organisation for Economic Co-operation and Development’s Beps project on the taxation of multinationals, but had a number of concerns.

The process should not be used to benefit big countries over small countries and equally must not be used to “single out US multinational entities. If Beps took this course it would be merely playing to the gallery”.

Differences between US rules on taxation deferral and the rules in some of Europe’s biggest economies, had led to some tension in the international arena.

In relation to “knowledge development box” proposals, he said proposals from Britain and Germany could be designed in such a way that would limit their scope for smaller countries. Further discussion was necessary, and he urged stakeholders to join the debate.

Mr Noonan praised the role played by the International Consortium of Investigative Journalists in “uncovering information behind the recent Luxembourg tax leaks stories” and said Ireland did not hide its 12.5 per cent corporation tax rate.

The Luxleaks reports involved journalists from a number of media outlets including The Irish Times, the Guardian, Le Monde, and other media groups in Europe, north and South America, and Australia.

Mr Noonan said the Irish tax system was transparent, with its rules clearly laid down in statute.

He said the Beps project cannot be a “dialogue of the privileged”. Ireland was conducting an analysis of how its tax system interacts with the developing world and he called for such an analysis to be adopted “at least in spirit” by all the OECD as part of the Beps project. The director of the OECD’s centre for tax policy and administration, Pascal Saint Amans, said the announcement by Ireland that it was ending the so-called “double Irish” tax structure was perceived as “extremely smart”.

Heinz Zourek, director of the European Commission’s DG taxation and customs union, said the debate within the union about a Common Consolidated Corporation Tax Base may be revived. He said commission president Jean Claude Junker was interested in reviving the idea but before work could resume, a clear political signal would be required.

The conference was organised by the Institute of International and European Affairs in association with KPMG.

It was supported by McCann Fitzgerald and the media partner for the conference was The Irish Times.