Noonan may have extra cash for budget, but it ‘won’t be dramatic’ 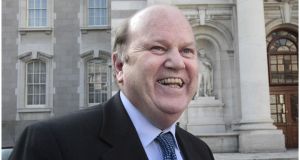 The amount of money available to increase spending and cut taxes in the budget should increase when new estimates are made in June, according to the Minister for Finance, Michael Noonan. However he warned that the amount of extra cash available “ won’t be dramatic”.

Speaking to the Oireachtas Budget Oversight Committee, Mr Noonan also said that discussions were under way on how cheap funding from the European Investment Bank could be used to help finance investment spending in areas such as the Dublin Metro, roads and social housing.

In the recent update of its economic forecast, the Department of Finance said that the carry-over costs of additional commitments made on spending and tax last year would reduce the room available in the budget to cut taxes and increases spending to about €550 million.

Addressing the committee, Mr Noonan said he believed higher growth and strong tax revenues would allow for some upward revisions of the figure in the Summer Economic Statement, due in mid June.

“I would be hopeful we would revise it in an upward direction,” he said, warnings however that the figures were unlikely to provide significant additional “headroom” in the budget.

“It will probably be positive but it won’t be dramatic.”

Any additional room for manoeuvre in the budget would be “modest,” according to the Minister. He said he did not expect a significant tax surplus at the end of the year, with revenues actually slightly behind in the first quarter.

He also said that no allowance in the budget data had been made for the abolition of water charges and the repayment of the conservation grant, recommended in the recent committee report.

In response to questioning, Mr Noonan expanded on earlier comments in relation to EIB funding being used to help fund key projects, such as the Dublin Metro, the completion of the upgrade of the Dublin-Cork road network, the proposed Cavan to Derry road project and new social housing.

The Minister said that this funding could be drawn down at low interest rates and kept off the State balance sheet if the projects were co-funded by the private sector and it could be shown that it would generate fee income in return to offset the cost.

The net cost to the exchequer might be higher than if the cash was directly borrowed by the NTMA, he said, but the key issue was that it could be kept off the State balance sheet.

Charges are needed to remunerate private investors and meet EU rules, he said. This could be achieved by road tolls in the case of motorway projects, he said, while the required returns on social housing projects had been arranged via a combination of rents on social housing and allocating some of the houses to be sold to the private sector. He said that discussions with the EIB were at an early stage. Consideration could also be given to using the surplus arising from Nama to help fund investment, the Minister said.

The Minister said that planning guidelines had to be considered, as part of infrastructure spending. If the current low-rise policies were maintained, Dublin would eventually spread “ as far as Athlone,” he said.

He disputed suggests that the help-to-buy scheme had been a factor pushing up house prices. Only €10 million had been injected via the scheme so far,he said, and it was not credible that this had pushed up house prices. The lack of housing supply was the key issue, he said.

1 Why are markets booming when a crash is on the way?
2 Could your old car be giving away all your secrets to its new owner?
3 Ryanair passenger traffic slumps 97% as shutdown restricts travel
4 Permission sought for €150m film and media campus in Wicklow
5 Dunnes Stores trials online ordering from Cornelscourt outlet
6 AIB U-turn on mortgage block for those on Covid wage subsidy
7 Vodafone to speed up 5G rollout using new technology
8 Staff at Bewley’s cafe on Grafton Street are made redundant
9 Covid-19: Publicans and restaurateurs row over calls for VAT cuts
10 Paschal Donohoe warns EU against going it alone on digital sales tax
Real news has value SUBSCRIBE