Planet Business: Job ‘snaplications’ and other things happening this week 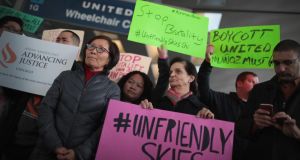 An anti-brutality demonstration at Chicago’s O’Hare International Airport that followed the forced removal of a passenger from an overbooked United flight.

Price tag on the Lindt Noccior Latte XXL Easter egg at Brown Thomas. It weighs 4.2kg and is described as “an Easter egg for a truly memorable holiday”.

Years that the much lamented Good Friday ban on the sale of alcohol in Ireland has been in place, making Easter all too memorable for some.

Estimated size of the Easter egg market in Ireland last year. The bad news is you have to “hunt” them down like Pokémon – or possibly at the same time as Pokémon.

Image of the week: United gets dragged

For a textbook example of how to make a bad situation worse, look no further than United Airlines. Never the most friendly of airlines, the US carrier has outdone itself. Not only was passenger Dr David Dao (69) bloodied by airport police as they removed him from an overbooked United flight, but United Airlines dared to call him “disruptive and belligerent” and said he injured his face when “he fell” on the armrest. After a share price collapse, an anti-brutality demonstration at Chicago’s O’Hare International Airport and jokes about United’s new “fight club” class, chief executive Oscar Munoz tried again. “No one should ever be mistreated this way,” said PR Week’s Communicator of the Year. “It’s never too late to do the right thing.” Here’s hoping, Oscar. Dr Dao’s lawyers will be in touch.

Snaplications are job applications that take place over Snapchat and they’ve arrived courtesy of McDonald’s Australia. From today, lucky Snapchat users in that country will be able to use a branded Snapchat “lens” that depicts the Snapchatter in a McDonald’s uniform and prompts them to send a 10-second video submission to the McDonald’s Snapchat account. “Snaplicants” are then asked to attend a formal interview, so it’s basically like the worst of both worlds. It’s all part of a regretful recruitment trend in which mastery of the short, self-filmed video is seen as a critical skill for all kinds of jobs. It’s merely a coincidence that this development facilitates recruiters’ bias in favour of beautiful people who happen to look a lot like them. On the plus side, video applicants for office jobs only need to buy the jacket half of the suit from now on.

Getting to know: Rachel Whetstone

Rachel Whetstone was until this week the head of communications for Uber, the “ride-sharing” company that has been somewhat weighed down by negative press of late. Whetstone (49) joined from Google in 2015 and her appointment didn’t exactly do any harm to Uber’s access to then UK prime minister David Cameron. Whetstone is a friend of Cameron’s, a former colleague of his at Carlton TV and – along with her husband, PR man Steve Hilton – was godparent to the Camerons’ late son Ivan. In 2015, the Camerons and the Osbornes attended an Uber Christmas party organised by Whetstone in Mayfair, London, at around the same time that Uber was lobbying hard against inconvenient London transport regulations. Cameron has since had to hail a taxi marked Brexit, and now its time for Whetstone to move on to her next destination too.

It’s hard to keep up with the thick and constant stream of Brexit-themed headlines, but here’s a random five updates from the world of Brexit this week with which to impress your friends.

1. Living standards: real pay is now pretty much zero in the UK, putting unpleasant and some might say unnecessary pressure on living standards.

2. Food prices: food inflation in Britain has reached its highest point in three years, thanks to the post-Brexit slump in the pound. Anyone for another supermarket price war?

3. Small firm risks: it is SMEs that will be most sensitive to the Brexit fallout, according to Central Bank chief economist Gabriel Fagan. The big guys can look after themselves. (He didn’t say that second bit.)

4. Divorce negotiations: the EU probably won’t ratify a post-Brexit trade deal with the UK if it tries to make itself a regulation-light “Singapore-on-Thames”, warned the EU’s ambassador to the World Trade Organisation.

5. It’ll be okay: so says Italy’s deputy finance minister Enrico Morando. It is “not the case” that “when there is fog in the [English] channel, the continent is cut off”. There is a lot of fog, though.

1 BOI customers to be charged twice with bank fees on New Year’s Eve
2 Irish designer of Oxford vaccine : ‘I’ve never worked so hard in my life’
3 Covid-19 will worsen housing affordability, report warns
4 Irish boss of Qantas says Covid vaccines will be mandatory
5 Chris Johns: I think we are on the cusp of an economic boom
6 Being polite in work emails is more important than ever
7 Oxford Covid-19 vaccine can be 90% effective, results show
8 EU transport companies fear chaos through Britain on January 1st
9 Microsoft to create 200 jobs at new €27m engineering hub in Dublin
10 Goldman Sachs advises NatWest on Ulster Bank review
Real news has value SUBSCRIBE