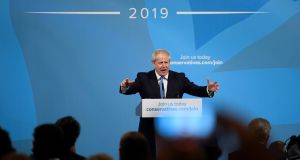 Leading ratings agency Moody’s said a no-deal Brexit was more likely than before as business leaders congratulated Boris Johnson on his appointment as leader of the UK’s Conservative Party on Tuesday.

However, they called for clarity on Brexit as the country hurtles towards a no-deal on October 31st.

Goldman Sachs revised its odds of a no-deal Brexit upwards from 15 per cent to 20 per cent and said the risk of a pre-Brexit general election had risen.

Carolyn Fairbairn, director general of the Confederation of British Industry, said Mr Johnson should now “seize the chance to show [that] the UK is open for business” and “restore confidence in our economy”.

“Business needs three things in the first 100 days. A Brexit deal that unlocks confidence; clear signals the UK is open for business; and a truly pro-enterprise vision for our country,” she said.

Ratings agency Moody’s warned that the probability of a no-deal had increased following Mr Johnson’s election. “With the election of Mr Johnson, the likelihood of a sustainable compromise appears lower than before,” said Colin Ellis, Moody’s managing director of credit strategy.

“Our view remains that a no-deal Brexit would have significantly negative credit effects for the UK sovereign and related issuers.”

Speaking after winning the Tory leadership race, Mr Johnson pledged to “get Brexit done” by October 31st and unite the country.

“Like some slumbering giant, we are going to rise and ping off the guy-ropes of self-doubt and negativity with better education, better infrastructure, more police, fantastic full-fibre broadband sprouting in every household,” he said.

“Companies want to see a pro-business approach from the offset. Specifically, he must deliver a sensible and pragmatic plan to break the Brexit impasse, demonstrating that the new government is fully committed to avoiding a messy and disorderly exit on October 31st.

“At a time when business confidence is low, the new prime minister must also take immediate steps to inject momentum and confidence into the UK economy, working with businesses over the coming weeks and months to create the best possible environment for long-term growth,” she added, noting that the stakes were high.

Sterling fell for the third straight day on Tuesday, dragged down by a firmer dollar. The currency fell as much as 0.5 per cent but pulled back by lunchtime in relation to the dollar, to $1.2472. The pound fell against the euro to 89.66 pence.

Leigh Himsworth, Fidelity International portfolio manager, said: “As far as financial markets are concerned, our eyes remain firmly fixed on sterling, which is reacting, almost by the minute, to the deal/no-deal narrative.”

Such volatility was a cause for concern in the UK’s food and drink industry, which flagged the destruction a no-deal would cause. “It will inflict serious and - in some cases mortal damage on UK food and drink,” said Ian Wright, chief executive of the Food and Drink Federation.

“Prices will rise, there will be significant shortages of some products, and disruption for shoppers and consumers will be far reaching,” he said.

Ulster Farmers’ Union president Ivor Ferguson said: “We have continually stressed that leaving the EU without a deal would be catastrophic for Northern Ireland’s farming community.

“A no-deal outcome resulting in high tariffs to sell into the EU market, lower-quality, cheap food imports and a hard border on the island of Ireland remain the biggest concerns and are ongoing issues regarding Brexit.”

The British Irish Chamber of Commerce called on both the incoming UK government and the EU to engage constructively in Brexit negotiations now that Mr Johnson will replace Theresa May in 10 Downing Street.

“Businesses on both sides of the Irish Sea have been operating without any clarity and in fear of a no-deal Brexit for too long. In recent weeks, small and medium-sized businesses have had to take the costly decisions to implement no-deal Brexit contingency measures that inhibit their ability to grow in the short term,” warned John McGrane, the chamber’s director general.

“The chamber urges all sides to identify a viable pathway forward that avoids this detrimental outcome and protects the 400,000 jobs that currently hang in the balance across these islands,” he added.

While a political impasse seems more likely now to some commentators, EU Brexit negotiator Michael Barnier said on Tuesday he was ready to work with the incoming British prime minister.

“We look forward to working constructively with PM Johnson when he takes office, to facilitate the ratification of the withdrawal agreement and achieve an orderly Brexit,” Mr Barnier said on Twitter. – Additional reporting: Reuters

1 Chris Johns: Past is another country when it comes to our post-pandemic future
2 Should my mam wait for house prices to drop before buying?
3 Citigroup warns that markets are out of step with reality
4 US ‘hard seltzer’ drink White Claw launches in Ireland
5 ‘I’m so lucky to be in the Caribbean – a million miles from Derry Girls’
6 Irish whiskey sales near milestone of 12m cases a year
7 Joint accounts: if one of us dies, can the other access the money?
8 Military-style planning can help businesses battle Covid-19 survival threat
9 Michael Smurfit: ‘I asked Trump to invite me to the White House for my 80th birthday’
10 Donohoe told insurers they risked ‘irreparable damage’ to reputation
Real news has value SUBSCRIBE