Nearly 30,000 could lose pandemic payment if they do not confirm eligibility 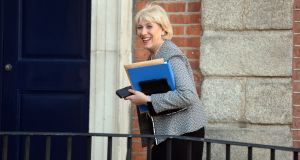 Minister for Social Protection Heather Humphreys urged workers in Kildare, Laois and Offaly who were affected by the new Covid-19 restrictions to apply for the pandemic unemployment payment. File photograph: Dara Mac Dónaill

Nearly 30,000 people receiving the Government’s pandemic unemployment payment could lose the benefit from next week unless they confirm their continued eligibility for the scheme within the coming days.

The Department of Employment Affairs and Social Protection said on Monday that 262,500 people would receive the special pandemic unemployment payment this week – down 12,100 on the figure for last week.

It said the number receiving the benefit had dropped 56 per cent since the peak that was reached in early May.

The department said that it had issued notifications over the weekend to about 29,000 people who had so far failed to confirm their continued eligibility for the payment.

It set a deadline of midday on Friday for the people concerned to reply. Otherwise it warned that no further payments under the scheme would be provided.

“Although the deadline to respond has already been extended once, a fourth communication issued over the weekend to the people concerned giving them until 12 noon on Friday next to respond. The communication advised that no further payments will issue after the payment that they receive tomorrow. However, they were also provided with a link to the www.MyWelfare.ie site where they can easily apply to have their payment restored.”

The department said that as long as the individuals concerned replied to it before noon on Friday they would receive the payment as normal next week.

“People can still apply to have their payment restored after 12 noon on Friday 14th August but given the time required to process payments though the banking system any restoration requests received after that time will be paid the following week.”

Minister for Social Protection Heather Humphreys said: “As part of its normal payments assurance processes the department contacts recipients across all its schemes from time to time to ask them to confirm their continued entitlement to the payment. Pandemic unemployment payment is no different in this respect and the department undertook a major programme of contacting all recipients and publicising the process via a large-scale advertising campaign.

“The vast majority of people responded and confirmed their eligibility. However, some people have not contacted the department or responded in any way to any of the three separate messages sent to them.”

The Minister also urged workers in Kildare, Laois and Offaly who were affected by the new Covid-19 restrictions to apply for the pandemic unemployment payment.

The department said in the past seven days, 11,100 people had closed their claim for a pandemic unemployment payment. It said 5,000 would be receiving their final payment on Wednesday.

It said the main sectors in which employees were returning to work this week were: accommodation and food services; wholesale and retail trade, repair of motor vehicles and motorcycles as well as construction.

Ms Humphreys said: “Over the past number of weeks, thanks to the efforts of everybody in our community, we have succeeded in reopening significant parts of our society. This is reflected in the continued reduction in the number of people claiming the pandemic unemployment payment. However, we cannot take this progress for granted and we have to safeguard the progress made by continuing to follow the advice of the National Public Health Emergency Team (NPHET).

The department said that in addition to those receiving the pandemic unemployment payment, there were also about 370,000 people working for more than 69,500 employers who were having their pay supported by the Government’s Temporary Covid-19 Wage Subsidy Scheme.

There were also 244,600 people on the Live Register as of the end of July.

About 191,300 people receiving the pandemic unemployment benefit will continue to receive the €350 higher rate of payment. This is down 9,100 on last week.