Nama returns to State ownership after €56m payment to investors 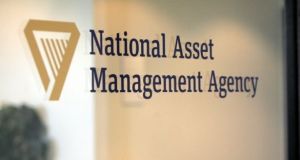 The National Asset Management Agency (Nama) has confirmed it has tied up final agreements with private investors ahead of it making a €2 billion payment to the exchequer.

The agency, set up over a decade ago to take over Irish banks’ property loans following the crash, is due to transfer its €4 billion surplus to the State, with the second tranche being handed over next year.

It said it had paid an outstanding €56 million to private equity investors on Tuesday, in a move that returns the agency to State ownership.

Private investors were brought into Nama via a special-purpose vehicle. It held a majority stake in an investment holding vehicle which was part of the agency structure in return for a €51 million investment. The mechanism was designed to ensure the agency’s liabilities – which totalled nearly €32 billion at their peak – would be kept off the State’s books.

“This is an important step which will allow us to transfer the first €2 billion of Nama’s lifetime surplus to the exchequer, providing the State with a valuable and large source of funds at this critical time,” said chief executive Brendan McDonagh.

“Today’s transaction highlights the progress Nama has made over the past decade in eliminating the €31.8 billion contingent liability on the State and in generating the cash needed to repay all its outstanding debt and equity obligations and to deliver a substantial surplus for the exchequer,” he added.