Minister for Finance says latest forecast says economy will grow by 3.7 per cent next year 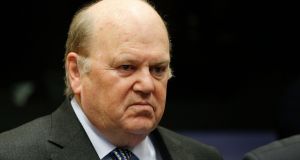 Minister for Finance Michael Noonan said on Monday the Irish economy is projected to grow by 4.3 per cent this year. Back in October, the Department of Finance had projected annual growth of 3.5 per cent. Photograph: EPA

Minister for Finance Michael Noonan has indicated the Government should have more scope to cut taxation and increase spending in next year’s budget as he upgraded economic forecasts for this year and next year.

Speaking at a conference in the Central Bank on Monday, co-hosted by the European Investment Bank, the Minister said his department is now projecting that gross domestic product (GDP) will expand by 4.3 per cent this year, compared its 3.5 per cent forecast at the time of the annual budget in October.

The economy is set to grow by 3.7 per cent next year, he said, against a previous estimate of 3.4 per cent.

While the Government forecast last October that budget 2018 is likely to expand by €1.2 billion, similar to the level for this year, Mr Noonan said “there probably will be some additional funds available” for next year as the economy has not been impacted as much as feared yet by Brexit.

“There are two problems at budget time: the first problem is that you actually have the money... and the second problems now is, even if you have the money, would you be allowed spend it under the fiscal rules,” he said. “It’s not going to make a lot of difference to fiscal space but, yes, it probably throws in a buoyancy of taxation alright that will be useful.”

The Minister added: “We hope that, as the year goes by, it may loosen out a little bit, but nothing dramatic that we’ll be throwing our hats in the air about.”

The new projections will be presented to Government on Tuesday under the latest annual draft update to Ireland’s stability programme, which it entered into in 2009 after breaching European Union deficit rules. The document is likely to be published before the Minister meets the Oireachtas budget oversight committee on Thursday.

“We now have two quarters of hard data since the Brexit referendum. They show that the immediate impact from Brexit has been more muted that initially anticipated,” Mr Noonan said. “This is consistent with the trends emerging in the UK, US and euro-area economies.”

However, the economy faces both internal and external challenges, he said.

“Domestically, the main risks related to potential loss of competitiveness, housing supply pressures and our concentrated industrial base, which leaves us exposed to firm- and sector-specific shocks,” he said.

“Principal among the international risks are the change to policy direction in the US, Brexit, the growing influence of populism in Europe and concerns about emerging market economies.”

Meanwhile, the Minister said that as the Government aims to lower its gross debt from about 75 per cent of GDP currently – and a peak of 123 per cent in 2013 – to an EU target of 60 per cent and a new national goal of 45 per cent by the mid 2020s, more emphasis should be placed on funding infrastructure off the State’s balance sheet through public-private partnerships (PPPs).

He said that a Metro line from Dublin city centre to the airport and new motorways, including one linking Cork and Limerick, are ideal candidates for PPPs that are currently being explored.

1 My aunt never told us that Gran passed away with no will
2 Ryanair and Aer Lingus cut flights as travel restrictions continue
3 Ireland’s age of retirement must be pushed out, watchdog warns
4 If it’s safe to do so, could this be the time to spend for Ireland?
5 Private investors acquire prime Dublin 2 assets as lockdown lifts
6 Political row brewing if Ireland loses its appeal on Apple
7 The $6bn judgment pitting Nigeria against Irish businessmen
8 Dublin banker sells island off coast of west Cork for €5.5m
9 Republic risks becoming ‘Europe’s North Korea’ on air travel, says Aercap chief
10 Green light for 1,102 residential units on Old Naas Road
Real news has value SUBSCRIBE