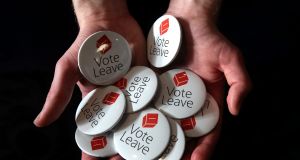 This quarter will be a tricky period” for many Irish manufacturing firms, ahead of June’s EU referendum in the UK, given that it is the destination for roughly one-seventh of Irish merchandise exports. (Photograph: Andrew Milligan/PA Wire)

Irish manufacturing growth slowed to a two and a half year low in April as output, new orders and employment all rose at weaker rates than in March.

The Investec Manufacturing PMI, which indicates the health of the overall manufacturing sector, fell to 52.6 in April, down from March’s 54.9 reading, the weakest level since November 2013.

“A particular concern within the report is the steep slowdown in the rate of growth in new orders, which moderated to a 29 month low. This sluggishness appears to be most acute in the export sector, as new export orders expanded only slightly in the month amid ‘a general weakening in demand in international markets’,” said Philip O’Sullivan, economist with Investec.

On the employment side, the rate of expansion slowed to the weakest seen in 2016 so far, but the ongoing increase in hiring activity suggests that Irish manufacturing firms expect that the current softness in new orders may not prove enduring, Mr O’Sulllivan said.

However, he expects the coming quarter to prove to be “a tricky period” for many Irish manufacturing firms, ahead of June’s EU referendum in the UK, given that it is the destination for roughly one-seventh of Irish merchandise exports.

“In this regard, firms should give careful consideration to strategies designed to provide some protection in the event of further sharp moves in the currency and/or commodity markets,” Mr O’Sullivan said.