Most significant monthly change was in area of clothing and footwear 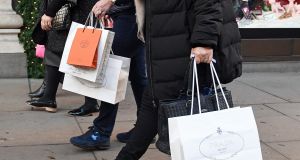 Over the past 12 months the cost of clothing and footwear has fallen 5.9%

Headline inflation remains in negative territory, with prices now falling by an average of 0.2 per cent year-on-year.

According to the latest Consumer Price Index for July, the most significant monthly change was in the area of clothing and footwear, with prices down 6.7 per cent on a monthly basis.

There was also a 1.5 per cent decline in the price of household furnishings and routine household maintenance.

Against that there were increases in the price of transport (+2.4) and restaurants and hotels (+1.1 per cent).

The figures reflect a slowdown in euro area inflation as a whole, which slipped to 1.3 per cent in recent months, having been nearly 2 per cent in April.

Over the past 12 months the figures show the cost of clothing and footwear has fallen 5.9 per cent, while household equipment and maintenance prices were down 4.3 per cent.

Conversely, prices in restaurants and hotels were up 2.4 per cent mainly due to higher prices for alcoholic drinks and food consumed in licensed premises, restaurants and cafes, and also an increase in the cost of hotel accommodation.

The price of housing, water, electricity, gas and other fuels was up 2.1 per cent, mainly due to higher rents. However, t they were partially offset by a decrease in the price of electricity and gas and lower mortgage interest repayments.