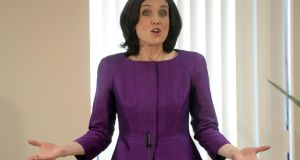 Northern Ireland Secretary of Sate, Theresa Villiers, announcing the new Corporation Tax Bill in January. Business leaders warn that the political crisis over welfare reform should not be allowed to threaten the bill.

Northern Ireland cannot afford to let the latest political crisis over welfare reform jeporadise its future economic prospects, a lead campaigner for the devolution of corporation tax has warned.

Eamonn Donaghy, who played a key role in the Grow NI campaign to persuade the UK Treasury to allow the Northern Ireland Executive to set is own rate of corporation tax, said he believes the North will only get one opportunity to make corporation tax work - and the time is now.

Mr Donaghy said: “This could be a short term political hiatus but corporation tax is a long term strategic economic lever, the current UK Government has agreed to it and the process to get the bill on the statue books is underway, the House of Lords was to consider the corporation tax bill on St Patrick’s Day, then it would go to Royal Ascent and after that it would be law - that could still happen.”

But he says the sudden political crisis has created a level of uncertainty which Mr Donaghy says is at the very lease “unhelpful”.

“This is our chance to get the corporation tax bill on the statue books - there is no second round the mulberry bush scenario here, this is Northern Ireland’s one opportunity and if it doesn’t happen, there is no alternative,” he warned.

The chief executive of the Northern Ireland Chamber of Commerce said business people will want their political to find a solution that secures the North’s economic future.

Ann McGregor said: “It is disappointing that the NI Executive appears to be heading towards another crisis which may undermine the devolution of corporation tax.

It is a disappointment given the recent positive progress made with the Stormont House Agreement. I encourage our politicians to find a resolution swiftly so that businesses - indigenous and Foreign Direct Investment - can create the jobs that will result from a reduced corporate tax level.”

As the political crisis unfolds a new survey published today (march 10) shows that a significant percentage of local business leaders believe a lower rate of corporation tax would have a positive impact on their firms.

The survey carried out by EY also highlights that local business people believe that the North’s Assembly should finance a lower rate of corporation by a reduction in revenue expenditure.

EY said recent research suggested that cutting the rate to 12.5 per cent could by 2017 boost employment by 4.5 per cent in the North which translates into 37,500 jobs.

Michael Hall, managing partner of EY Northern Ireland said: “The positive reaction to the reduced corporation tax rate from the business community comes as no surprise.

“The reduction will greatly enhance Northern Ireland’s ability to attract FDI and enable the indigenous companies to re-invest savings back into their businesses. The question that remains, however, is one of cost; and debate over the next few months will be centred on the best approach to offset the net reduction in the local budget over the next five years.”