Kenny not expected to follow Greece in debt relief demands 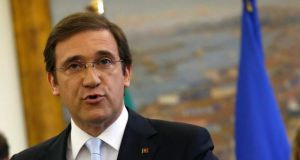 Portugal’s prime minister Pedro Passos Coelho. He said Greece must “respect its commitments” and comply with European rules like everyone else. Photograph: Reuters/Rafael Marchante

Taoiseach Enda Kenny travels to Brussels tomorrow for meetings with the head of the European Commission and European Council amid increasing signs that a limited form of debt renegotiation will be agreed for Greece.

Mr Kenny is not expected to use the meetings to plead for Irish debt renegotiation. He will hold bilateral meetings with Jean-Claude Juncker and Donald Tusk just 24 hours after Greek prime minister Alexis Tsipras took his campaign for Greek debt relief to Brussels.

Mr Kenny’s meetings with the head of the European Commission and European Council had been scheduled since December, but it is expected the resurgent Greek debt crisis will now feature in discussions.

It is understood the Government will not use today’s meetings to plead for further debt relief for Ireland, but the Taoiseach is likely to underline the Government’s stated position that any deal for Greece should be in the interest of the euro zone economy.

Nonetheless, any perceived leeway towards Greece could increase domestic political pressure to seek further Irish debt renegotiations. Comments by the Portuguese prime minister last week underlined the political difficulties that would ensue if the euro group consented to a recasting of the Greek bailout, particularly for former bailout countries.

Pedro Passos Coelho, whose country exited its three-year bailout last year, said that Greece must “respect its commitments” and comply with European rules like everyone else.

“Each one has to do their part. During these three years, we did our part of the job and so we can demand that the others also do so.”

While the new Syriza-led government in Athens has tempered its quest for a nominal debt writedown, it is in negotiations about swapping its outstanding loans for bonds linked to gross domestic product growth.

However, following his meeting with Mr Tsipras, European Council president Donald Tusk stressed the need to find a solution “acceptable to all member states involved in the negotiations”.

European Parliament president Martin Schulz also warned of the consequences of any unilateral move by Greece, telling German daily Handelsblatt that any move by Greece to end its agreements would mean that other parties would no longer be obliged to keep their commitments.

The Taoiseach is also expected to strongly defend Ireland’s corporate tax regime at a meeting with Mr Juncker. The European Commission president has pledged to tackle corporate tax avoidance during his five-year term as head of the EU’s executive arm, following last year’s Luxembourg Leaks scandal.

Germany, France and Italy have been leading calls for the European Commission to draw up EU-wide laws to curb corporate tax avoidance, while economics commissioner Pierre Moscovici has pledged to revive the Common Consolidated Corporate Tax Base, a proposal strongly opposed by Dublin.

1 Air travel never going ‘back to way it was’
2 Should I switch bank now with Ulster Bank at risk of closing?
3 Will brother’s widow get half of our parents’ estate when they die?
4 Tánaiste urges businesses to brace for Brexit with 100 days to go
5 Pallet manufacturer looks to imports as timber crisis takes root
6 ‘Tax war’ will hit Ireland if digital tax talks fail, OECD says
7 FinCEN Files: Dublin business features in leak of US treasury documents
8 A look at Elon Musk’s track record ahead of Tesla’s ‘battery day’
9 Majority of submissions favour changing law on forestry licence appeals
10 New €2m telecoms research initiative described as a ‘game-changer’
Real news has value SUBSCRIBE