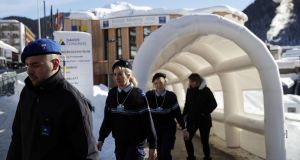 Security personnel outside the venue for the World Economic Forum, in Davos, Switzerland, on Sunday. World leaders, influential executives, bankers and policymakers are attending the three-day event. Photograph: Stefan Wermuth/Bloomberg

The droves of black limousines on the snow-covered streets of Davos during the World Economic Forum are frustrating the locals of the Swiss mountain town.

In a country where the central bank chief and government ministers regularly take public transport, the failure of Forum attendees to do the same is the top complaint of the town’s 11,000 residents. They say traffic gets so snarled it becomes dangerous for children to walk to school.

The frustration also highlights the culture clash between the inhabitants of the midmarket ski resort and the overseas business, political and entertainment glitterati who rub shoulders there for a few days each January.

“People wear leather dress shoes and then use the limousines because they don’t want to slip on the ice,” said Ladina Alioth, a teacher and mother of three recently elected to the local legislature. She’s proud to host the WEF and but says last year it was too disruptive. “I wear boots and pack the shoes I wear indoors – why can’t they do that too?”

The four-day annual meeting on Magic Mountain kicks off on Tuesday. Once the crowds head home, the Davos mayor’s office asks citizens what they want done better. Limos topped the 2018 complaints.

The WEF is vital to local businesses and generates an estimated 2 million francs (€1.8 million) in tax revenue for the town. But recent local resistance to increasing funding for security suggests a level of Forum fatigue has set in.

The nexus of activity is town’s conference centre, but parties and cocktail receptions take place farther afield, including the Intercontinental Hotel, a 40-minute walk away. The WEF’s guide for attendees includes information on local transport options and advice to bring “comfortable, warm shoes”. It also provides shoe grips for snow.

“Over the last several years, the amount of private cars and traffic in Davos has increased significantly,” said Soumitra Dutta, a professor at Cornell and a regular attendee who takes a WEF-organised bus from Zurich airport. “I am not surprised that local residents are not pleased with the congestion.”

While the city bus regularly plies the main drag of Promenade (transport is free), a delegate’s agenda packed full with meetings, seminars, lunches and evening parties can make a car appealing. Uber is also offering its services for the week.

“The people of Davos complain, but they also earn a lot,” said Joerg Grossmann, who owns a limo service in Zurich that sends about 35 cars to the Forum. It may look “very excessive, but it also offers people flexibility and security”, he said, explaining that some insurance companies even require that one be on-hand.

In response to the complaints, this January authorities are building a temporary train station just below the conference centre. Mayor Tarzisius Caviezel says he hopes that will get more people on to public transport.

Trucks dropping off material to build temporary pavilions and transform shops on the main street into corporate lounges added to last year’s traffic mess. In 2018 there were 23 pop-up spaces, more than double the number just five years earlier. To rein them in, the mayor has introduced new permits and banned sites from redecorating overnight.

The WEF says it takes residents’ concerns to heart and has held meetings with authorities to address them.

Managing director Alois Zwinggi has sympathy for those who might not feel comfortable using public transport, but says it’s also the Forum’s job to raise awareness: “Welcome to Switzerland. You can take the train, you can take the bus, you won’t get lost.” – Bloomberg

8 Donohoe promises no ‘cliff-edges’ in removal of Covid supports