A 3D generation shows what Limerick's Ted Russell Docks will look like in the future following the announcement that a €100m plus investment is to be made in limerick's docklands. Video: High Design VR 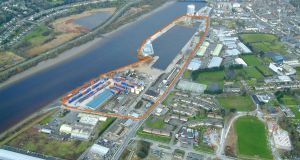 A plan to transform 75 acres of Limerick docklands estate into an economic hub will create more than 1,000 jobs and involve a minimum of €100 million of development, organisers have said.

The assets earmarked for development include disused buildings and greenfield land banks that are surplus to the operational needs of the thriving Ted Russell Docks.

“The docks have been and will remain the core SFPC commercial activity at the Limerick docklands estate, which extends 2.15km along the river Shannon waterfront,” said the company.

“However, the strategy is the first time that non-core assets will be explored for their commercial potential in a programme that will attract significant inward investment and potentially in excess of 1,000 jobs.”

The company said the programme could involve a minimum of €100 million of development, potentially delivering 75,000sq m of new and existing buildings at the Ted Russell Docks, Corcanree Business Park and other sites off the Dock Road.

The company has already had discussions with a number of potential partners on individual projects within the wider scheme with a view to enabling works to begin on initial projects next year.

SFPC also said it would be necessary to realign access for heavy goods traffic to the western end of the Ted Russell Docks itself to allow for development of non-core assets at the docks, starting with the 3,000sq m Bannatyne Mills.

The mill is earmarked for a multimillion euro transformation into a commercial hub that could be home to up to 300 employees.

Other elements will include the relocation of internal operating facilities from the eastern end of the docks to the western end, resulting in land reorganisation within the operational port that will deliver an overall net gain of 0.38 hectares.

“The eastern end of the port adjoining James Casey Walk has suffered from a number of inappropriate interventions over the years,” the company said.

It is proposing to visually enhance the setting of the cluster of heritage buildings at the eastern end of the port adjoining James Casey Walk through the demolition and removal of “insignificant buildings and features”.

Furthermore, the company is to redevelop the 15 hectare Corcanree Business Park at the western end of the docklands with the option of providing a direct, internal connection to the operational port without reliance on the Dock Road.

“The key objectives of this strategy are that we have a viable working port at Ted Russell Dock, better transport and access to the operational port, and a commercial return on the non-core assets which are surplus to port operational requirements.

“The development potential of 31 hectares between the city centre and motorway is enormous. Its job-creation potential is huge, and it will, therefore, be one of the key economic catalysts for Limerick and the region in the years ahead.

“Unprecedented economic gain has been achieved in this city and region over the past five years thanks to a spirit of collaboration across all key stakeholders. Delivery on this will only be possible with that collaboration.”

Aryzta sees improvement in revenue trends in July 07:26
Apple’s $250bn Irish dividend, Bank of Ireland’s U-turn, and the cost of divorce 06:30
Stocktake: A record-breaking cheating season 05:50
Transferring the family farm without a tax headache 05:50
Stocktake: Tech stocks have taken over the market 05:40

1 Apple’s $250bn Irish dividend, Bank of Ireland’s U-turn, and the cost of divorce
2 ‘No demand... because there are no people’ at well-known Dublin pub
3 Divorce: What will it cost and can you afford it?
4 Transferring the family farm without a tax headache
5 Nearly 30,000 could lose pandemic payment if they do not confirm eligibility
6 Apple received $250bn dividend from Irish subsidiary in 2019
7 UK criticised for ‘unforced errors’ on post-Brexit trade deals
8 Pmask coverings likely to suit meat plant workers, founder says
9 Bank of Ireland does U-turn after refusal to reimburse ‘smishing’ victims
10 ‘Humble’ Airbnb going back to basics
Real news has value SUBSCRIBE