Less detailed and informative in his analysis than predecessor Janet Yellen 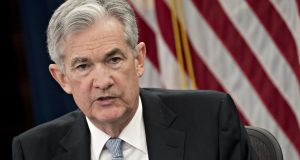 Jerome ‘Jay’ Powell, chairman of the US Federal Reserve.

Showing all the deliberation of a trained lawyer, Jay Powell on Wednesday gave a cautious presentation following his first meeting as Federal Reserve chairman that avoided startling financial markets or setting off political bushfires.

“We are trying to take the middle ground,” Mr Powell said when asked about his rates strategy, insisting that future moves would continue to follow the gradual path set by his predecessor, Janet Yellen. “There is no sense in the data that we are on the cusp of an acceleration in inflation,” he said.

Markets were left largely unmoved by the Fed decision and Mr Powell had every incentive to avoid excitement. This was, after all, the first time he has presided over a meeting of the Federal Open Market Committee, and a market sell-off triggered by an unduly hawkish new chairman would be an inauspicious way to kick off his reign.

The Fed is journeying into perilous political waters. While Mr Powell insisted the risk of White House hostility to higher rates did not cause him to lose any sleep, political blowback remains a hazard. The US central bank is set to lift rates at a quicker pace in part because of a huge, and in some analysts’ view ill-advised, fiscal stimulus being hurled by the Republican-led congress.

That will potentially put the central bank into opposition with politicians who have no desire to see the recovery reined in. “He played his cards close to his vest, which was the right move to make,” said Diane Swonk, chief economist at Grant Thornton. “He succeeded in not roiling the markets, but he also didn’t say a lot.”

Mr Powell’s style provided a number of notable breaks from that of Ms Yellen. He was less detailed and informative in his analysis of the economy than the former chair, offering relatively brief responses on topics such as the neutral rate of interest in a press conference that lasted just 45 minutes.

Mr Powell repeatedly went out of his way to play down the significance of Fed policymakers’ median rate forecasts in their Summary of Economic Projections (SEP). The only decision the Federal Open Market Committee had made on Wednesday, he stressed, was to lift rates by a quarter point.

Fed forecasts were simply a collection of individual views, he said, and the FOMC could easily change its mind about the economic prospects. The upshot, analysts say, is that investors may be forced to make do with foggier guidance as to where policy is headed — even though Mr Powell hinted that he may be willing to speak to the media at more regular press conferences.

While it is too early to draw conclusions, this could also point to a chairman who places less emphasis on forecasts emanating from theoretical economic models and more on actual data and market movements.

“The new chair played down the significance of the SEP median rate trajectory in a manner that was neither hawkish nor dovish, without providing any replacement guidance on the path beyond a reaffirmation of a ‘gradual’ pace,” said Krishna Guha of Evercore ISI.

That said, even a brief look at those Fed forecasts leaves an unmistakably bullish picture of the US economy. According to policymakers’ median projections, unemployment is set to drop to 3.6 per cent in the next two years — the lowest since the late 1960s and nearly 1 percentage point below the Fed’s estimate of the longer run jobless rate.

After years of undershoots, core inflation is seen as edging above 2 per cent in 2019 and 2020. Growth, too, will be stronger than previously expected, as rate-setters factor in what Mr Powell described as “meaningful” increases in demand because of the fiscal stimulus. Underscoring the change of tone, the Fed in its post-meeting statement inserted new language stating that “the economic outlook has strengthened in recent months”.

While its policymakers stuck with forecasts showing a total of three rate rises in 2018, the median projection was only a whisker away from rising to four, and the outlook for 2019 was lifted from two to three.

By 2020, the midpoint of the Fed’s target range will now reach 3.4 per cent. This is notably higher than the central bank’s 2.9 per cent estimate of the neutral rate, which, Mr Powell said, amounts to “modestly restrictive” policy. It represents an important change for a central bank that has spent the post-crisis period falling over itself to stimulate the US economy.

As Mr Powell himself implied, the US is entering a new era. “The economy is healthier than it has been since before the crisis,” he said.