Irish investment in US at ‘all-time high’ 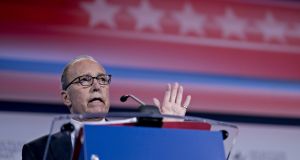 Irish investment in the US is now at an all-time high, with many companies who have traditionally seen Britain as their main export market, looking further afield, the head of the American Chamber of Commerce in Ireland has said.

“We’re seeing massive opportunities for Irish companies in the United States, ” he said. “There are a lot of misconceptions about breaking into this country. In many ways the US is not one country but a continent of countries, with states offering their own incentives when it comes to tax and regulation.” He also noted that the US aligned closely with the Irish business model when it comes to regulation and tax matters.

The American Chamber of Commerce in Ireland is leading a delegation of Irish companies who are attending this week’s Select USA conference in Washington DC. The conference is America’s largest annual event dedicated to attracting investment into the US.

Addressing the conference on Tuesday, Larry Kudlow, US president Donald Trump’s national economic adviser, said that the Trump administration’s policies are “solidifying the United States as the premier location to do business”, noting in particular the tax and regulatory changes at federal level introduced by the Republican administration. Ivanka Trump and Treasury Secretary Steve Mnuchin are also due to address the conference.

Encouraging investment into the US has been a key policy of Mr Trump, who has pledged to recalibrate the global trading system and create more jobs.

While Irish officials have been keen to stress that Irish companies employ more than 100,000 people in the US, most of this number is represented by a few companies like CRH and Kerry Group. Mr Redmond said, however, that an increasing number of Irish companies of all sizes perceive opportunities across the Atlantic. According to the American Chamber, 800 Irish companies have operations in the US.

The American Chamber of Commerce has recently initiated a mentoring programme whereby experienced executives from companies with business interests in the US, coach others who wish to break into the market.

Ireland has the eight-largest delegation at this week’s summit in Washington.

Among the companies attending the Select USA conference are Ornua, PM Group, Smarttech and Taoglas. Foreign direct investment (FDI) into the US now tops $4 trillion, according to figures provided by Select USA, with the US home to more FDI than any other country in the world.

1 Should my mam wait for house prices to drop before buying?
2 Covid-19 mortgage breaks: What’s the catch?
3 Almost 70% of home buyers to purchase within next year
4 Brother is dragging his heels as executor of uncle’s will - is there anything I can do?
5 Dublin drops out of top 50 in ranking of best cities for start-ups
6 Covid-19 takeover of private hospitals to cost insurers €180m
7 Revenue faces US drug company Perrigo over disputed €1.64bn tax bill
8 Consumer watchdog tests face masks to ensure they meet standards
9 Olympic nostalgia a reminder of Eurosport’s big play
10 Cheers: Conor McGregor's whiskey races up the sales chart
Real news has value SUBSCRIBE