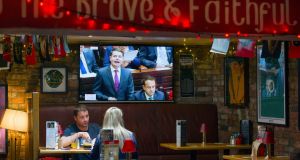 Inflation-proofing tax and welfare changes in the budget would cost the Government an additional €1.2 billion, a new study has indicated. As Eoin Burke-Kennedy writes, it has been a perennial bugbear of workers here that tax cuts announced in the budget are often eroded by the Government’s decision to keep tax bands and credits unchanged from the previous year. Similarly if welfare rates are not increased in line with price growth, the purchasing power of welfare recipients can fall, increasing poverty rates and inequality.

A pub featured in sitcom Father Ted, a company owned by a well-known developer and a defunct medical equipment seller were among the tax defaulters hit with bills totalling ¤22 million by Revenue in the first quarter of the year. More than 60 businesses and people settled for €21.1 million in tax, penalties and interest following scrutiny of their affairs by Revenue in the three months ended March 31st, the latest list of defaulters shows.

More than a quarter of Irish news consumers decided not to share a news story in the last year because they doubted its accuracy, according to a digital news report published today by the Reuters Institute for the Study of Journalism. The report also found that the 25-34 age group are the most likely to pay for online news, with 19 per cent indicating that they did so, compared to only 7 per cent for 55-64 year olds.

Ciarán Hancock reports that the combined turnover for Ireland’s top 50 construction contractors increased by 25 per cent to ¤8.39 billion last year.

Fiona Reddan, in her column this week, studies the statistics on mortgage lending and what they reveal about the type of applicants who succeeded in getting a mortgage last year. It throws up a few surprises.

Finally, in commercial property, Ronald Quinlan reports on the purchase of an office scheme in Dublin’s Docklands - at the site of the the former An Post sorting office - for ¤240 million by Singapore trust Mapletree Investments. He has also has news on the upcoming sale of a 3.2-acre residential site in Blackrock, Co Dublin, with a guide price of ¤6 million.

1 Dublin banker sells island off coast of west Cork for €5.5m
2 Lidl goes to court over Aldi price survey
3 Will Revenue come calling with tax bill if inheritance tax threshold falls?
4 Nigeria seeks more time to fight $9.6bn award to Irish businessmen
5 Cairn Homes plan for former RTÉ site draws 19 objections
6 ‘My rent here is so low it’s a joke’
7 European shares climb on progress with possible Covid-19 vaccine
8 Owners of Cork shopping centre sue for €30m after car causes fire
9 Majority of employees don’t want to return to pre-Covid working patterns
10 If tourists are such pariahs should we not be testing them on arrival?
Real news has value SUBSCRIBE