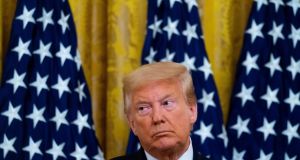 US president Donald Trump’s sweeping restrictions on immigration will damage both the Irish and US economies as they struggle to recover from the coronavirus pandemic, the American Chamber of Commerce Ireland has said.

Mr Trump’s restrictions, which will affect everyone from green card applicants to scientists, doctors and au pairs who were hoping to go to the US, will remain in place until at least the end of the year.

In his executive order, Mr Trump said admitting more green card holders and temporary workers posed an economic threat to American workers. One of his officials said the ban would create job opportunities for 500,000 Americans.

Ireland is now the ninth largest investor into the US, with over 600 Irish companies investing more than $146 billion and employing over 110,000 people in the US.

American Chamber of Commerce Ireland chief executive Mark Redmond pointed out on Tuesday that the figures demonstrate “the truly mutually beneficial nature of the Ireland US two-way business relationship”.

“The US-located operations of Irish companies play a critical role in US domestic supply chains including medicines, food and construction,” he said.

“Equally the Irish operations of US multinationals play an essential role in global supply chains including medical technology and pharmaceuticals.

“These operations primarily serve markets outside the USA, but the ultimate benefit accrues to the US.

“The ability of subject matter experts to travel, subject to Covid, between the US and Ireland/EU to support these supply chains is of paramount importance as is the two-way transfer of skills between the USA and Ireland.

“The American Chamber is concerned that any restrictions on the necessary travel of subject matter experts or enabling skills transfer would have negative consequences for economic growth and recovery on both sides of the Atlantic.”

According to US State Department statistics for last year, a total of 10,106 Irish citizens were last year issued with visas across the seven categories impacted by Mr Trump’s ban.

The H-2B, which is granted to seasonal workers outside the agricultural sector such as landscaping and forestry, was issued to 213 Irish citizens.

Elsewhere, the J1 visa, granted for cultural and educational exchanges to students and researchers and typically used by au pairs, was issued to 7,315 Irish citizens. The J2, for their spouses and dependents, was issued to 74.

Finally, the L1 visa, granted to executives transferring from a position abroad with the same employer, was issued to 1,255 Irish citizens, while the L2, which is issued to their immediate family members, was issued to 707.

A spokesman for the Department of Foreign Affairs said it “remains in close contact with the US administration on visa and immigration issues”.

He said the Department called on the US authorities “to ensure that applications for exemptions to the current restrictions continue to be processed”.

“While we would very much like to see the resumption of bilateral people-to-people contacts, our current advice against non-essential travel remains valid,” he added.

Several major US companies have criticised the ban. A spokesman for Google said America’s success depends on companies having “access to the best talent from around the world”.

“Particularly now, we need that talent to help contribute to America’s economic recovery,” he said.

“Unilaterally and unnecessarily stifling America’s attractiveness to global, high-skilled talent is short-sighted and deeply damaging to the economic strength of the United States.”

A spokesman for Facebook said the move “to keep highly-skilled talent out of the US will make our country’s recovery even more difficult”.

“Highly-skilled visa holders play a critical role in driving innovation – at Facebook and at organisations across the country – and that’s something we should encourage, not restrict.”