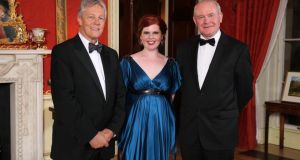 More than 150 potential overseas and domestic investors gather in Hillsborough Castle tonight at the invitation of Northern Secretary Theresa Villiers in advance of tomorrow’s special investment conference in Belfast.

The event comprises investors, ambassadors and government officials from 16 countries from the world’s leading and emerging economies, reflecting the Stormont Executive’s drive for foreign direct investment from growing markets in Asia and South America.

The investment conference will be addressed by British prime minister David Cameron as well as Peter Robinson and Martin McGuinness. Enterprise minister Arlene Foster will follow addresses by the First Minister and Deputy First Minister and introduce a list of speakers representing organisations which have already invested in Northern Ireland.

The conference, to be hosted at Titanic Belfast in the city’s docklands, will then move into private session with potential investors joining workshops to discover that the region has to offer.

During the afternoon delegates will have the opportunity to take part in workshops relating to key sectors – advanced manufacturing, aerospace, financial services and technology, ICT and the creative industries.

A closing reception will be staged at Stormont’s Parliament Buildings.

Organised by InvestNI on behalf of the Stormont Executive, the investment conference follows a commitment made at the G8 summit, held in Fermanagh in June, at which Mr Cameron pledged his support.

The initiative is in tune with the Executive’s established policy of growing Northern Ireland’s relatively small private sector and “rebalancing” the economy away from public spending. It also reflects the aims of the Economic Pact, agreed with the British government by Mr Robinson and Mr McGuinness earlier this year.

Mr Robinson said: “Last week’s announcement of 1,000 new jobs by USA company Stream demonstrate our ability to attract international foreign investment. The progress in the Economic Pact shows our commitment to a long-term stable future and to our economic growth.”

Mr McGuinness added: “We want to reach out to emerging economies, many of which are represented at this week’s investment conference. We are eager to encourage good government relations and promote trade and investment links. Plans to open a bureau office in Beijing early next year are progressing well. This will undoubtedly strengthen relations with China and develop mutually beneficial opportunities for partnership collaborations.”

1 Why are markets booming when a crash is on the way?
2 Could your old car be giving away all your secrets to its new owner?
3 Permission sought for €150m film and media campus in Wicklow
4 Dunnes Stores trials online ordering from Cornelscourt outlet
5 Vodafone to speed up 5G rollout using new technology
6 Covid-19: Publicans and restaurateurs row over calls for VAT cuts
7 AIB U-turn on mortgage block for those on Covid wage subsidy
8 Staff at Bewley’s cafe on Grafton Street are made redundant
9 Ryanair passenger traffic slumps 97% as shutdown restricts travel
10 Paschal Donohoe warns EU against going it alone on digital sales tax
Real news has value SUBSCRIBE