Ireland may benefit from fallout of Swiss vote 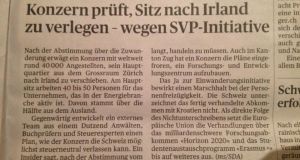 In Zürich’s ‘Tages-Anzeiger’, the growing unease is front-page news. Under the headline “Concern examines shifting base to Ireland” the paper reported that an unnamed energy company, employing 40,000 people worldwide, had already called in consultants

Ireland could emerge as a winner from the recent Swiss vote to reintroduce inward migration quotas, including on EU citizens.

The decision contradicts existing bilateral treaties the non-EU country has with Brussels and, so far, EU officials have reacted coolly to Swiss overtures for renegotiated terms. Swiss managers, alarmed at a looming legal limbo, have begun drawing up contingency plans if they feel unable to attract the talent they need.

For Zürich’s leading Tages-Anzeiger daily, the growing unease is front-page news. Under the headline “Concern examines shifting base to Ireland” the paper reported that an unnamed energy company, employing 40,000 people worldwide, had already called in consultants.

“We’ve been given the order to prepare the exit of the concern to Ireland,” an unnamed consultant told the newspaper.

Atmosphere
Even before the migration vote Swiss managers had complained of an increasingly chilly atmosphere. Two-thirds of voters last year voted in a referendum to cap manager salaries and, the consultant told the Tages-Anzeiger , the latest migration vote “was the straw that broke the camel’s back”.

The Swiss-US chamber of commerce (AmCham) in Zürich has fielded dozens of calls from nervous executives, wondering why Swiss voters are antagonising the EU – a trading partner counting for more than half of all Swiss exports.

AmCham chief executive Martin Naville told callers it was too soon for them to worry about being unable to attract the staff they need, pointing to a three-year window to agree a new migration deal. Though he saw no need for firms to start packing just yet, he conceded the mood of uncertainty was poisonous for business.

“There is uncertainty here, which makes plan B planning more urgent in the minds of the top guys here,” said Mr Naville.

Even before the migration vote, Ireland had cropped up in the Swiss business pages with increasing frequency.

In December, Pentair, a leading manufacturer of valves, filtration and pumping systems, announced it was shifting its incorporation base from Switzerland to Ireland.

Shift
Earlier this month internet company Yahoo signed a deal to shift its data-processing operation in the same direction.

The internet company insisted the move was not motivated by an interest to cut its tax bill. However, the shift comes as Swiss politicians face pressure from the EU to modify rules allowing companies such as Yahoo to halve the tax payable on profits earned outside Switzerland.

EU rules forbid discrimination between domestic and foreign companies and, amid growing international debate of corporate tax rates, a rule change is likely. Though Switzerland may modify its tax rate, analysts say it is unlikely to drop its headline corporate rate to Ireland’s 12.5 per cent.

Recent changes to Yahoo’s terms of business have informed customers that, from next month, their business partner is no longer their local subsidiary but an Irish-based entity – a shift reflecting the business model of arch rival Google.

A decade after Yahoo first opened an office in Dublin, the Swiss operation is reported to be closing in July.

Yahoo’s move has cast attention on other big tech operations, such as auction website Ebay and Google which employs about 1,300 people in Switzerland.

Beyond reports of planned exits, Swiss business observers say there is a growing trend of uncertain companies cancelling planned investment into Switzerland.