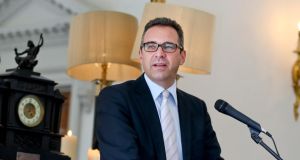 Ireland has “no chance” of securing a deal on its legacy bank debt, one of the most influential figures in German politics has told The Irish Times.

Joachim Pfeiffer, who is the economic policy spokesman for the parliamentary group of the ruling Christian Democrats, said the euro zone’s new bailout fund had not been established for nor would be it used for retroactive bank recapitalisation.

“There is no chance Ireland’s legacy assets will be paid by the European Stability Mechanism (ESM). This instrument is only an instrument for emergency.”

His comments appear to punch a hole in the Government’s long-standing campaign to be compensated for the €25 billion it pumped into Bank of Ireland and Allied Irish Banks at the height of the crisis.

Dr Pfeiffer was in Dublin yesterday to speak at an event hosted by the German-Irish Chamber of Industry and Commerce.

The German politician said the rules governing the ESM regime had “already been decided” and that the €60 billion fund would only be used for future bank rescues. “If you look at the text, there is no possibility of retroactivity.”

If the ESM was to be used retroactively to compensate Ireland, he said other countries such as Greece, Spain, Portugal and potentially Italy would want similar compensation.

He said Ireland’s debt burden had already been substantially reduced through the extension of its troika loans and via the Anglo promissory note deal.

Last night, a spokesman for the Department of Finance insisted European leaders had agreed that retrospective recapitalisation would be decided on a case-by-case basis and that this was clearly laid out in the agreement establishing the ESM.

“The agreement now in place gives us the option of applying to the ESM for a retrospective direct recapitalisation of the Irish banks. An application can only occur after the single supervisory Mechanism is operational, most likely towards the end of this year.”

The ESM’s direct bank recapitalisation instrument will come into effect in November when the European Central Bank takes over supervision of euro zone banks.

Minister for Finance Michael Noonan has indicated the Government will make an application when the mechanism becomes operational but not necessarily this year.

Dr Pfeiffer, who also held a short meeting yesterday with Taoiseach Enda Kenny, said the euro zone debt crisis was not yet over but that Ireland was “now firmly on the right track”.

He said Ireland was an example to other countries in how it had accepted the burdens of its financial past, increased its competitiveness through lowering its labour costs and reformed its tax code.

“If you look to Italy and France, especially to France, I don’t see them as being on the right track.”