Trade betwee the two has more than doubled in past five years, says Irish ambassador 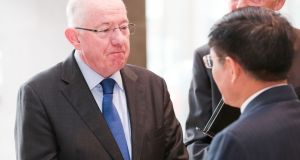 Then minister for foreign affairs Charlie Flanagan greets the Chinese ambassador to Ireland, Yue Xiaoyong, at a meeting in Dublin in 2016. Mr Flanagan, now Minister for Justice, announced in June that Ireland would soon introduce a five-year multi-entry visa option for Chinese visitors. Photograph: Alan Rowlette

Ireland and China celebrated their 40th anniversary of diplomatic relations last week, and trade figures suggest the bilateral relationship is one that is rapidly growing in importance.

While relations can be complex, business between the two nations was booming and bilateral trade hit €17 billion in goods and services last year, according to Eoin O’Leary, Ireland’s ambassador to China.

“That figure has more than doubled over the past five years,” he told The Irish Times, “and we are one of the few countries to enjoy a trade surplus with China.”

Co-operation between Ireland and China was at “an all-time high” he said, pointing to success stories in tourism, education, trade and investment.

Irish food exports to China continue to grow and were valued at €758 million last year, according to Bord Bia, up 6 per cent in volume terms from the year before. Dairy, meat and seafood form the bulk of exports, while Irish infant formula was a particularly strong performer, accounting for 13 per cent of the Chinese market in 2018.

Last year Ireland was the first major EU beef exporter to be granted access to the Chinese market, a development warmly welcomed by Irish farmers looking to cultivate new markets.

Connections between the two countries have been facilitated by the fact there are now direct flights to Dublin from Beijing, Shenzhen and Hong Kong, and on the tourism side more than 100,000 Chinese visitors were welcomed to the island of Ireland last year.

Tourism Ireland announced recently it would be ramping up its marketing team in China with a view to increasing the number of Chinese visitors to 200,000 by 2025. In a move aimed at boosting that initiative, Minister for Justice and Equality Charlie Flanagan announced in June that Ireland would soon introduce a five-year multi-entry visa option for Chinese visitors.

The Irish embassy estimates there are about 9,000 Irish citizens living in greater China, with about 6,000 of those based in Hong Kong. More than 400 Irish companies have invested in China, it says

Doing business in China can be fraught with difficulty and in a recent position paper the European Union Chamber of Commerce in China asked the question: “Can international companies operate on a level playing field in China?”

While the chamber could point to some recent progress, the report concluded that, “As it stands, the answer is a clear ‘no’,” citing a range of issues such as market access barriers, unequal access to subsidies, forced technology transfers, a dearth of licences for international firms, differentiated treatment and sectors crowded out by monopolistic state-owned enterprises.

Coaxing China to amend rules that make it difficult for foreign companies to operate was an ongoing challenge, Mr O’Leary admitted, but while in the diplomatic community there was “an element of promise fatigue” as China failed to act on its pledges, he felt overall recent discussions indicate “things are going in the right direction”.

Beyond the embassy in Beijing, Ireland has consulates in Shanghai and Hong Kong, and to further support Irish interests in China, Mr O’Leary said the government would be assessing plans to open a third consulate in the next few years.

Speaking at a ceremony in Beijing last Monday to mark the anniversary, Song Jingwu, vice-president of the Chinese People’s Association for Friendship with Foreign Countries, said that China and Ireland relations “have become a model of friendship between countries, regardless of their differences in systems, historical backgrounds and geographical size”, adding that many Chinese were now looking to Ireland for opportunities.

About 3,500 Chinese students are participating in courses in Irish higher education institutions, and another 1,500 are enrolled in English-language courses.

The Immigrant Investor Programme – under which non-European Economic Area nationals and their families can commit to an approved investment in Ireland to acquire residency – has attracted more than 1,200 applications since 2012, with 93 per cent of them coming from China.

On the business operations side, there are about 37 Chinese companies in Ireland, employing more than 3,200 people, according to the IDA. The mobile company Three Ireland, owned by CK Hutchison from Hong Kong, is the largest Chinese employer in Ireland, with about 1,400 employees. Another big investor is WuXi Biologics, which aims to create 400 jobs when it is fully up and running in Dundalk.

Huawei Technologies employs nearly 200 people in Dublin, Cork and Athlone. The telecoms giant has been a controversial player in the rollout of 5G as the US and other countries accuse it of being a cyber security risk because of its close links to the Chinese government.

In regard to Huawei in Ireland, “a security review is going on and this was raised in the Dáil”, Mr O’Leary said. “To date, however, Huawei and Ireland have a very good relationship ... that’s very successful”. The parliamentary questions would deal with the broader security issue, he said.

Another question that has come up in Dáil Eireann recently related to China’s human rights situation, in particular in Xinjiang where an estimated 1.5 million ethnic Uighers and other Turkic Muslims are being subjected to “mass arbitrary detention, forced political indoctrination, restrictions on movement, and religious oppression”, according to Human Rights Watch.

The Irish embassy and the political leaders who visit from Dublin raise these issues with the Chinese side “in a respectful way”, Mr O’Leary said, adding they had called for full access to the re-education camps for European ambassadors and Michelle Bachelet, the UN high commissioner for human rights.

“Ireland is a strong supporter of human rights and we don’t hide that,” he said. “but we don’t I suppose believe in megaphone diplomacy.”

6 US offers pathway to profit CRH paved in last recession

10 Ryanair among airlines to demand reduction in airport landing fees