Beijing and Washington spar ahead of G20 summit in Japan

Tariff friction continues as two sides prepare to face off 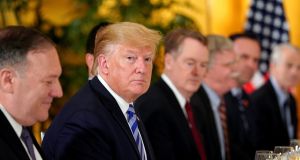 US president Donald Trump at a bilateral dinner with Australian prime minister Scott Morrison ahead of the G20 summit in Osaka, Japan. Photograph: Kevin Lamarque/Reuters

As China and the US prepare to meet on the sidelines of a G20 summit in Japan, Beijing slammed Washington as a “bully” and “evil” on Thursday in reaction to threats from US president Donald Trump in the ongoing trade war.

China was provoked by an interview Mr Trump gave Fox Business Network on Wednesday in which he threatened to impose further tariffs on Chinese goods if his terms were not met.

“My plan B is that if we don’t make a deal I will tariff, and maybe not at 25 per cent, but maybe at 10 per cent, but I will tariff the rest of the $600 billion (€528bn) that we’re talking about,” Mr Trump said, adding that he thought the Chinese economy was “going down the tubes” and he might do “less and less business with it”.

In response, China’s foreign ministry spokesman Geng Shuang said on Thursday that China would continue to oppose “unilateralism, protectionism and bullying practices...Chinese people are not afraid of any evil or any pressure.”

The state-run Global Times newspaper echoed that view, saying the trade war was “an ill-intended attempt by the US to contain China’s economic and technological rise”, adding that “whole-of-society efforts are under way to prepare for a protracted trade war with the US”.

The tone was substantially different from earlier in the week when treasury secretary Steven Mnuchin suggested a truce might be on the cards, saying “we are about 90 per cent of the way there, and I think there’s a path to complete this”.

Behind the high-pitched rhetoric China will be hoping for a breakthrough and to at least avoid any additional tariffs. Yet at the root the conflict is an ideological battle, and one that runs much deeper than trade, according to George Magnus, author of the recent book Red Flags: Why Xi Jinping’s China is in Jeopardy.

He said the trade talks broke down in May due to President Xi Jinping’s pushback against what he viewed as “unacceptable demands” after Washington insisted on China undertaking far-reaching legal reforms.

“I think China is hunkering down for a protracted struggle with the US/west which is ostensibly about commerce but fundamentally about beliefs, standards and values.

“In this sense it doesn’t really matter what if anything is agreed in Osaka because it cannot address the fundamental causes of the contemporary friction.”

Adding to the anticipated friction over the coming weekend, groups critical of Beijing’s human rights record in the predominately Muslim province of Xinjiang and opponents of a proposed extradition law in Hong Kong are expected to stage protests while Mr Xi is in Osaka.

The Yomiuri Shimbun newspaper reported on Thursday that Chinese officials have demanded that Japan “protect Xi’s dignity” throughout the summit.