Trump lashes out at EU over tech antitrust cases 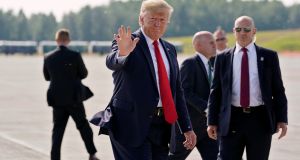 US president Donald Trump on his way to the G-20 Summit in Osaka. Photograph: Kevin Lamarque/Reuters

Donald Trump broadened his assault on US allies on Wednesday, lashing out at the European Commission for aggressively pursuing antitrust cases against US technology groups as actions by an EU regulator who “hates” America.

Mr Trump said lawsuits against the likes of Google and Facebook should be brought by the US and not European authorities. In an interview with Fox Business, he saved his strongest criticism for Margrethe Vestager, the EU antitrust commissioner who has won praise in Europe for attempting to rein in Amazon, Apple and Google for alleged abuse of their dominant market positions or corporate tax avoidance.

“She hates the United States perhaps worse than any person I’ve ever met,” Mr Trump said. “What she does to our country. She’s suing all our companies. We should be suing Google and Facebook...They’re suing Apple. They’re suing everybody.”

Although Mr Trump has aimed much of his “America First” rhetoric against China, he has also launched repeated trade offensives against close allies like Japan, Canada, Mexico and the EU. Mr Trump was speaking ahead of his departure for Japan where he will attend the G20 summit in Osaka this week.

Mr Trump also lashed out at Japan ahead of his arrival in Osaka by asserting that the US-Japan mutual defence alliance – which most experts view as the linchpin of security in the Pacific – was uneven.

“If Japan is attacked, we will fight World War III. We will go in and protect them with our lives and with our treasure,” Mr Trump said. “We will fight at all costs, right? But if we are attacked, Japan doesn’t have to help us at all. They can watch on a Sony television.”

Mr Trump has previously attacked Japan and South Korea, another key US ally, for not bearing more of the cost of hosting American troops in their respective countries. His latest comments about Japan will raise concern in Tokyo as he prepares to meet Shinzo Abe, Japanese prime minister, on Friday in Osaka.

At the G20, Mr Trump will also meet Angela Merkel, the German chancellor he publicly slammed last year at a Nato summit over Germany’s failure to meet an alliance-wide goal of spending 2 per cent of the gross domestic product on defence. Their meeting on Friday will be the first since that summit in Brussels.

The G20 is also being attended by Donald Tusk, the EU council president, and Jean-Claude Juncker, the European Commission president, raising the possibility that the leaders will have a chance to talk to Mr Trump about his complaints about the EU actions on antitrust.

Brussels attempted to sue for peace after Mr Trump threatened to impose tariffs on European aluminium and steel imports, but the US president has continued to attack EU economic policies and warned he could impose duties on the far more sensitive European car industry.

Mr Trump’s broadside came on the same day Ms Vestager launched an antitrust case against the US chipmaker Broadcom, accusing it of unfairly using “contractual restrictions” with the makers of TV set-top boxes and modems to shut out rivals. Broadcom is one of the world’s largest suppliers of components for the devices.

The Broadcom case comes near the end of the Danish commissioner’s five-year term, during which she has built an international reputation as a formidable enforcer. She fined Google and Qualcomm billions of euros for abusing their market power to harm rivals and has also cracked down on the sweetheart tax deals offered by EU countries to multinational companies such as Apple, Starbucks and Amazon.

Ms Vestager has repeatedly denied any bias and pointed to the many similar decisions against European companies such as the tax crackdown on Ikea, Fiat and French utility Engie.

Mr Trump is not the first US president to question Ms Vestager’s pursuit of American tech groups. In 2015, President Barack Obama criticised the numerous antitrust and tax actions as driven by “commercial interests”.

But Mr Obama’s language was less vituperative, insisting that European politicians were pursuing US tech groups in order to protect their domestic competitors rather than out of any hatred of the US. At the time, Brussels called the criticisms “out of line”.

The commission declined to comment on Mr Trump’s new remarks. Although Ms Vestager is approaching the end of her term, she remains in the running to become the next president of the European Commission. EU leaders meet in Brussels this Sunday when they hope to choose the next commission president and nominees for three other top EU jobs.

Mr Trump has been a critic of large US technology groups almost since the day he assumed the presidency, lashing out at them as politically liberal companies that are biased against his administration and supporters.

Earlier this month, he told CNBC the US should be taking the same approach as the EU towards concentrations of power in the technology industry. “I think there is something going on in terms of monopoly,” he said.

The latest remarks will intensify pressure on companies such as Google, Facebook, Apple and Amazon, all of which are under scrutiny by Congress and US regulators for possible antitrust violations.

US antitrust enforcers have laid the groundwork for possible investigations into all four companies, carving up jurisdiction between the Department of Justice and the Federal Trade Commission as to which agency should look into which company.

This development has sparked intense lobbying in Washington, where some of Google’s critics, including TripAdvisor, Yelp and Oracle, are reportedly preparing to brief justice department officials on their complaints about the search engine company, according to the Wall Street Journal.

Google itself, aware that it might become the first casualty of any concerted push to take antitrust action against Silicon Valley giants, has shaken up its lobbying team in Washington. The company has reportedly fired several of its largest external lobbying firms as it expands its own in-house public affairs team

Mr Trump also suggested the US should sue Twitter, which he has accused of unfairly limiting his follower numbers. “Twitter is just terrible, what they do. They don’t let you get the word out. I’ll tell you what, they should be sued because of what’s happening with the bias,” the president said.

He added: “These people are all Democrats, it’s totally biased toward Democrats. If I announced tomorrow that I’m going to become a nice liberal Democrat, I would pick up five times more followers.” – Copyright The Financial Times Limited 2019

1 In six months we will be in the grip of a 1980s-style recession
2 Angela Merkel sweeps in to save the euro zone
3 Mortgage approvals tumbled in first full month of lockdown – BPFI
4 Property price drop of up to 12% this year a ‘reasonable’ assumption – McDonagh
5 Facebook looks increasingly immoral and thoughtless
6 Ryanair to process all Covid-19 refunds within 10 weeks, Michael O’Leary says
7 Cork-based AI supply chain company Keelvar raises $18m
8 Chartered Land moves closer to approval for Dublin’s tallest tower
9 Ibec warns ‘conservative’ lifting of lockdown will make downturn worse
10 Retailers ‘asked to work almost like hospitals’ during reopening
Real news has value SUBSCRIBE