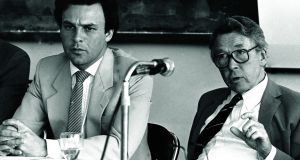 Professor Louden Ryan (right), then chairman of the National Planning Board in 1984 with Dr Peter Bacon, director of the board secretariat. Photograph: Paddy Whelan /The Irish Times .

Louden Ryan, one of the State’s most influential economists and one of Trinity College Dublin’s most charismatic professors, has died, at the age of 95.

Ryan played a seminal role in forming Irish economic policy in the 1960s, advising civil servant TK Whitaker and then taoiseach Seán Lemass on a series of economic plans that would reverse decades of protectionism and self-defeating economic policies.

The period saw the Republic unilaterally reduce import tariffs, negotiate a free-trade deal with the UK and join the EU (then the European Economic Community), a process that is widely credited with transforming the economy and modernising the State.

As well as penning several major reports for government, Ryan chaired the inaugural National Economic and Social Council in the 1970s, a forerunner to social partnership, and the National Prices Commission, an early iteration of the National Competitiveness Council.

His significant contribution to public life was done in parallel with an illustrious teaching career at Trinity College Dublin, where he was professor of economics for several decades. His microeconomics textbook, Price Theory, was a standard primer from Irish undergraduates right up until the 1980s.

Former colleague and friend John O’Hagan described him as “a great communicator and a master at chairing meetings”. “He took huge interest in staff and students and was one of the most gifted teachers the university has ever had,” Prof O’Hagan said.

Ryan began his academic career in the London School of Economics before taking up a lectureship at Trinity College Dublin in the 1940s, where he was later given the chair of industrial economics at the relatively young age of 40.

In the 1960s he became a director of the Central Bank at a time when TK Whitaker was governor. During this time he was seconded to an internal division of the Department of Finance to advise on economic policy as per Whitaker’s wish to have an external economist involved in planning.

After 12 years with the Central Bank, he joined the Bank of Ireland board, where he became deputy governor and subsequently governor for a full six years before retiring in 1991.

His former students include Rupert Pennant Rea, later deputy governor of the Bank of England and editor of the Economist; Hamish McRae, economics commentator for the UK Independent; Alan Matthews, professor of European Agricultural Policy; and the late Paul Tansey, a former economics editor of The Irish Times. Ryan is survived by his daughter Jane and his son Jonathan.