Irish butter and whiskey could be hit as US allowed to impose $7.5bn in tariffs 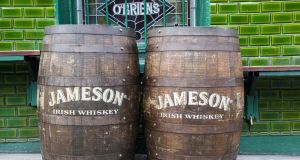 The Irish Whiskey Association had been lobbying key figures in Washington ahead of the announcement, seeking an exemption. Photograph: iStock

The World Trade Organization (WTO) has given the US the green light to impose $7.5 billion (€6.9 billion) worth of tariffs on European exports – possibly including Irish butter and whiskey.

The Geneva-based organisation issued its judgment in the long-running trade dispute, ruling that the US could impose trade measures worth up to $8.5 billion over what it has said are unfair subsidies given to Airbus.

The office of the US Trade Representative is now expected to announce details of which products will be affected. Whiskey and butter were on the original list of goods drawn up by the US earlier this year, but this list is expected to be narrowed.

Representatives of Irish producers including the Irish Whiskey Association, as well as officials from the Irish Embassy in Washington, have been lobbying key figures in Washington ahead of the announcement in a bid to secure exemption for Irish products.

The announcement by the three-person arbitration tribunal in Geneva brings to an end a dispute that stretches back almost 15 years. But the WTO is due to rule on a parallel case brought by the EU against US support for Boeing early next year.

Any move to include Irish goods in the tariff scheme would be highly damaging.

The US is the Republic’s primary export market for whiskey, with more than €620 million worth of product sold in the fast-growing market last year. Similarly, Kerrygold is the second-most popular butter brand in the United States. More than 34,000 tonnes of the butter was exported to the US in 2018.

An analysis by Ibec found that Irish goods would be the most exposed, on a per capita basis, to the proposed US tariffs on EU goods, noting that €818 million worth of products would be hit.

“Given that the food and drink sector makes up two-thirds of the exports of indigenous firms there is potential here for significant knock-on impacts on the domestic economy,” the association wrote in its most recent economic outlook.

The tariffs are unlikely to come into force for several weeks. They are distinct from other US sanctions that have been threatened by US president Donald Trump against EU goods, from cars to wine.

Mr Trump said last month that he would tax French wine over concerns about a proposed French digital tax which would hit US companies disproportionately.

Trade between the US and EU topped almost $1.3 trillion last year. Incoming EU trade commissioner Phil Hogan said during his confirmation hearing in Brussels this week that Europe “has to stand up for itself” and should identify American products that could be hit in retaliatory action if the US imposes the sanctions.