Ikea’s plans, GoCar expands, Ryanair’s US legal case, and the dark side of tech 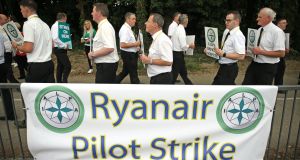 Ryanair pilots picket outside Dublin Airport in July. The airline faces a US legal case taken by shareholders in relationa to its industrial relations woes earlier in the year

Ryanair faces a US legal case taken by shareholders claiming the airline made “false and misleading statements” about its industrial relations woes earlier in the year. Papers filed yesterday in a New York court argue that Ryanair and Mr O’Leary failed to reveal in company statements and discussions with industry analysts that labour relations were deteriorating. Ryanair vowed to vigorously “defend and defeat these bogus ambulance chaser claims” which it said had no basis in reality. “Contrary to these invented claims, Ryanair has experienced very little industrial action this year from its staff,” the airline argued.

Swedish home furnishings giant Ikea is eschewing further expansion of its store network in Ireland, after a strong performance online following its entry a year ago into the ecommerce space.

Irish car sharing company GoCar intends to double its fleet next year with an investment The Irish Times understands will amount to about €10 million. Since the company was launched in 2008, more than 30,000 drivers have signed up to the service - a figure it expects will increase to 100,000 by the end of next year. Additionally, GoCar is expanding its fleet from about 500 vehicles currently to 1,000.

Central Bank deputy governor Sharon Donnery has been beaten by an Italian economist in a competition to become the next chair of the European Central Bank’s (ECB) banking supervision arm. However, the result of the ballot by members of the ECB governing council on Wednesday has boosted the odds of Central Bank governor, Philip Lane, securing an executive position at the Frankfurt-based organisation next year - as well as Ms Donnery’s chance of succeeding him in Dublin.

The chief executive of Irish-based food group Greencore said the company is now contingency planning for a no-deal Brexit, but insisted the business was less exposed to such a scenario than others. “To be clear UK grocery, the UK food industry does not want a disorderly Brexit with no withdrawal agreement,” he said. “But if we end up in a world where these is a shortage of one particular ingredient, we’ll just make something else,” he said.

The Web Summit yesterday echoed to more words of warnings about the risks of technology from several speakers, including the powerful EU competition commissioner Margrethe Vestager. In his wrap of the event so far, Charlie Taylor says there is a definite end to the “happy, clappy” tech conferences of old and a sense of realisation that perhaps the good guys aren’t really good guys after all.

In her column, Karlin Lillington considers the warnings by Tim Berners-Lee that the internet is reaching a “tipping point”, but argues there are signs it may be heading towards a more responsible web.

If you’ve ever watched Dragon’s Den, you will have sat through a few excruciating pitches. It seems that too many startups make the error of not making pitching skills a priority. Olive Keogh interviews several experienced founders about how there’s no magic bullet at becoming good at presenting your idea - it’s a learned skill.