Ryanair and O’Leary being sued by US pension fund 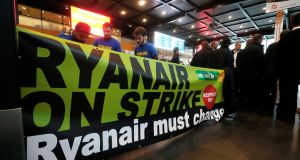 US shareholders are suing Ryanair and chief executive Michael O’Leary for making “false and misleading statements” about the airline’s industrial relations woes.

A shareholder, City of Birmingham Firemen’s and Policemen’s Supplemental Pension System, on Wednesday filed papers in a New York court on behalf of itself and other investors, seeking damages against the company and Mr O’Leary.

The pension fund, based in Birmingham, Alabama, claims that between May 30th, 2017, and September 28th, 2018, Ryanair and Mr O’Leary made “false and misleading statements” about relations with workers and unions that artificially inflated the carrier’s share price.

The papers argue that Ryanair and Mr O’Leary failed to reveal in company statements and discussions with industry analysts that labour relations were deteriorating.

The filing maintains that Ryanair was unable to hire or keep enough pilots to meet expected demand in the face of strikes, increasing the risk of cancellations; and that it needed to increase pay and benefits significantly more than a €100 million estimate in order to recruit and retain staff.

The investor claims that when the cost of its industrial-relations problems prompted Ryanair to warn on October 1st that profits could fall below expectations, its American depositary shares had dropped 15 per cent to $80.93 (€70.67) when New York’s Nasdaq market closed. That price was 36 per cent lower than the $126 high that the same shares reached during the period covered by the claim.

“The decline in the price of Ryanair American depositary shares was the direct result of the nature and extent of the defendants’ fraud finally being revealed to investors and the market,” City of Birmingham says.

Ryanair vowed to vigorously “defend and defeat these bogus ambulance chaser claims”, which it said had no basis in reality.

“Contrary to these invented claims, Ryanair has experienced very little industrial action this year from its staff,” the airline argued.

Ryanair said that over eight days of strikes, it operated more than 90 per cent of its schedule with minimal disruptions.

The company blamed air traffic control staff shortages and strikes for most of its flight disruptions and said this affected all EU airlines.