IDA warns of need to do more to maintain competitiveness 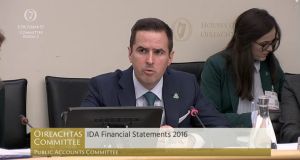 The head of IDA Ireland has warned of the need for steps to be taken to safeguard the country’s competitiveness.

Appearing before the Committee of Public Accounts on Thursday, the agency’s chief executive, Martin Shanahan, said competition from other countries and cities for foreign investment has never been as strong as it is now. He added that although the State is still winning business, it cannot afford to rest on its laurels.

Mr Shanahan said the State continued “to punch above its weight” when it comes to attracting foreign direct investment (FDI). However, he said that although the Republic’s “value proposition” remains valid, there is a need to do more to ensure it is can compete with other countries.

“The IDA is making steady progress on winning investments but we cannot be complacent,” said Mr Shanahan. “These investments will not fall into our laps. They will have to be won against stiff international competition.”

He outlined a number of areas where progress is needed, including resolving the housing crisis, investing more in infrastructure and improving broadband availability nationwide.

“Increasing levels of industrial unrest and uncertainty in the planning process also impact on Ireland’s international reputation for stability and consistency. Vigilance in relation to public finances is needed to protect the hard won gains already made, as well as continuing to address the enterprise cost base, and to deepen and broaden productivity growth,” he said.

“A continuation of pro-enterprise policies is a pre-requisite to continue to win these investments,” Mr Shanahan added.

Turning to Brexit, Mr Shanahan said it had led to increased interest in investing in Ireland, as seen by announcements from financial institutions such as JP Morgan, Barclays and Bank of America. He said there were also opportunities for newly mobile investment from companies currently resident in the UK. He added however, that Brexit would also be likely to bring some adverse impact and challenges.

“FDI companies that depend heavily on the UK market have already been impacted by exchange rates and they may also need to consider supply chain challenges in a post-Brexit environment,” he said.

Client companies created just under 19,000 new roles last year, with every region of the State posting net gains in jobs.

“This performance was produced against a background of unprecedented geopolitical changes, and underperforming European economy and intense competition from other jurisdictions for FDI,” Mr Shanahan said.

Although Ireland accounts for just 1.8 per cent of EU GDP, it wins 4.5 per cent of FDI projects to Europe and 7.5 per cent in the sectors targeted by the IDA.

Mr Shanahan said the State agency has witnessed a “strong pipeline of projects” in the first half of 2018.

Questioned by TDs and Senators, Mr Shanahan revealed that Connect Ireland, an initiative to use the Irish diaspora to bring jobs to Ireland, generated just 544 new roles at a cost of €2.2 million.