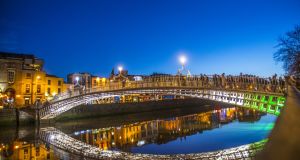 Ha’penny Bridge, Dublin: more expensive than London to live in due to the strength of the euro and weaker sterling.

Dublin has overtaken London as the more expensive city to live in due to the strength of the euro and weaker sterling.

Dublin is ranked 19th out of 133 cities, while London has fallen to 30th place, its lowest ranking in 20 years.

The survey by The Economist Intelligence Unit said the weakening of sterling since the Brexit vote had pushed the UK capital down the rankings.

Last year, Dublin was ranked slightly cheaper than London, ranking 25th in the survey, while London was ranked 24th.

The survey, which assesses the cost of a basket of more than 150 goods such as food, drink and clothing across 133 cities around the world, found the sharp decline of sterling and continued economic uncertainty resulting from the EU referendum have pushed London and Manchester sharply down the rankings.

The report noted that Britain’s cities are at their cheapest level internationally in more than two decades, in part due to economic uncertainty following the 2016 Brexit vote.

Paris is the second most expensive city jointly with Zurich.

Singapore tops the ranking, with Hong Kong in fourth place, Oslo in fifth and Geneva in sixth. The cheapest cities include New Delhi and Bucharest.

The report’s author said that while the declines mean British cities are cheaper compared to their international peers, the rise in import prices caused by weaker sterling will mean locals won’t see their own shopping baskets falling in price.

Singapore retains its title as the world’s most expensive city for a fifth year running in a top 10 largely dominated by European cities.

No North American city is in the top 10, although New York is 13th and Los Angeles is 14th.

1 Sacrificing pubs for schools: Ireland’s latest Covid trade-off
2 Elderly parents living in property you own will save you on capital gains tax
3 How safe is it to go back to the office?
4 Owner of Dundrum Town Centre to sell prized assets
5 Hiring right people is key in Meath liqueur firm
6 Eggs in a bottle – liquid gold for free-range producer
7 Is foreign travel during a pandemic antisocial behaviour?
8 How to . . . move (almost) everything to your new phone
9 Most workers now expect choice to work from home part-time
10 HealthBeacon becomes official NHS supplier and seeks extra funds
Real news has value SUBSCRIBE