Has Donald Trump just fired the first shot in a trade war?

Cliff Taylor: US president has imposed tariffs on imported steel and aluminium 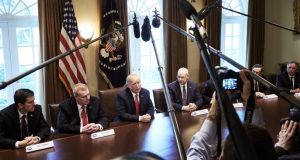 What has Donald Trump done now?

He has announced that the United States plans to impose tariffs – taxes designed to protect domestic producers – on imported steel and aluminium. Trump said the US would impose a 25 per cent tariff on steel imports and 10 per cent on aluminium imports, with details to be announced next week. In a series of tweets he said other countries had been “ taking advantage of the US” and it now had to respond. This is clearly designed to protect US producers, which have long pointed at China as trading unfairly and flooding the world market. Trump wants American firms to open closed plants and rehire workers. The US imports about 30 per cent of its steel. Ironically, Canada rather than China is the main source of imported steel and aluminium for the US market.

How did it come to this?

The US president ordered a study of imports and competition in the sector last year, particularly in relation to the needs of the American military. The US commerce department provided him with various options, of which he has chosen the most aggressive, a blunt tariff on all imports. It is possible that when the details are announced some countries that sell the metals to be US may be exempted or be able to apply to avoid the tariffs. Trump has invoked national-security considerations, which are normally reserved for times of war or national emergency, making his move unprecedented among the big players in recent years.

Already other countries and blocs, including the European Union, China, Brazil and Canada, have threatened to retaliate. This could escalate quickly once Trump confirms the details next week. The EU has said it may have to protect its own market from a flood of imports of steel that would otherwise have gone to the United States. It has also said it would have to consider retaliatory tariffs against US imports. Other steel producers have said the same; China, for example, has threatened tariffs on US soybean imports.

At the start, yes. The risk is of an escalation where other countries’ retaliation against the initial US measures spurs President Trump to up the ante and target other sectors as well. Global trade has grown since the second World War, helped by a succession of agreements to cut tariffs and free up trade. But efforts to agree a new round of global tariff cuts in the so-called Doha Round, overseen by the World Trade Organisation, have faltered.

When a country (USA) is losing many billions of dollars on trade with virtually every country it does business with, trade wars are good, and easy to win. Example, when we are down $100 billion with a certain country and they get cute, don’t trade anymore-we win big. It’s easy!

When a country Taxes our products coming in at, say, 50%, and we Tax the same product coming into our country at ZERO, not fair or smart. We will soon be starting RECIPROCAL TAXES so that we will charge the same thing as they charge us. $800 Billion Trade Deficit-have no choice!

Trade was a big issue in the 2016 US presidential election, with Trump promising firm action to protect American producers and targeting China in particular in his comments. He also singled out the role of the World Trade Organisation. This led to fears of trade wars when he was elected.

Lack of action on trade in his first year in office led many to conclude that his bark was worse than his bite. But he has now moved. In a tweet today he said that when a country is losing billions of dollars with virtually every country it does business with, “trade wars are good and easy to win”. He later tweeted that the US would soon be introducing “reciprocal taxes” against countries that put tariffs on American products.

What is the economic threat ?

First there is the impact of the tariffs. These may protect American metal producers, but they will push up prices of imports for thousands of steel-using companies in the US, such as car manufacturers, and this will knock on to consumers. The Swedish giant Electrolux announced on Friday that it was putting on hold a planned investment in a factory in Tennessee because of this. Retaliatory tariffs around the world will also have an economic cost, both for the US and for the other countries.

The wider risk is the development of a trade war that could significantly harm global economic confidence and growth. This possibility has already led to heavy falls on world stock markets.

The Republic is not directly hit by Trump’s initial move, but, as a country heavily reliant on international economic growth and free trade, any slump into a trade war would be damaging for the economic outlook.

Worryingly, having secured passage for his tax bill, this is where President Trump now seems to be concentrating his attention. Most economists believe that the tactics are economic madness. Close attention will now be paid to the details of the tariffs announcement.