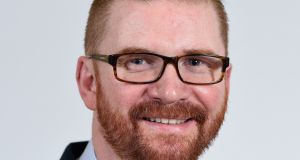 Simon Hamilton was among DUP politicians and advisers who gave evidence last year to a judicial inquiry established to examine the renewable heat incentive scandal that led to the collapse of the Executive. Photograph: Michael Cooper

High-profile Northern Ireland Executive minister Simon Hamilton is turning his back on politics to take over at the head of the Belfast Chamber for Trade and Commerce.

Mr Hamilton, a member of the Democratic Unionist Party (DUP), who served as economy and finance minister up to the collapse of the Stormont Executive, will assume the new role in September.

He says Belfast needed a Brexit deal that “does not harm jobs” and was “business friendly”, and warned that the incoming British prime minister needed to take a “common sense” approach to Brexit.

The DUP has repeatedly refused to back the withdrawal agreement and recently warned again that “the next prime minister will have to deal with the backstop”. But, according to the Belfast Chamber, 78 per cent of its members support the current draft Brexit withdrawal agreement.

Mr Hamilton said he intended to stand down as a DUP MLA for Strangford and step away from politics completely because Belfast Chamber was an “apolitical organisation”.

His decision has come as a surprise to some in the North who have questioned why one of the DUP’s most high-profile former government ministers – and a man who many believed might one day be a DUP party leader – was calmly walking away from a political career spanning nearly two decades.

Mr Hamilton was among a number of DUP politicians, including party leader Arlene Foster, and DUP advisers who gave evidence last year to a judicial inquiry established to examine the renewable heat incentive (RHI) scandal in the North, which led to the collapse of the Executive.

The RHI scheme was a flawed green-energy scheme established without proper controls, which could cost Northern Ireland up to £500 million in the long term.

Mr Hamilton revealed in evidence that he had been aware a DUP special adviser had leaked emails designed to take scrutiny away from the party’s role in the scheme and place it instead on civil servants. Giving evidence to the inquiry Mr Hamilton said it was “not my proudest moment”.

Explaining his reason for leaving politics, he said the chief executive role at Belfast Chamber was a “job that excites me”.

“This is a fantastic opportunity to do something that I have a passion for. I have always been interested in finance and the economy, I have a background in the private sector and I have had the privilege in many ministerial roles to work closely with business and industry, particularly in Belfast.

“I share Belfast chamber’s vision to transform and regenerate the capital into a more vibrant and stronger city,” Mr Hamilton said.