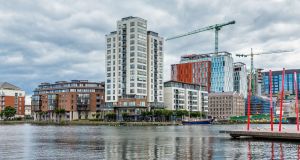 While the demand for short-term rentals fell, the report said the supply of long-term rental units more than doubled.

The short-term rental market in Dublin’s docklands has “collapsed”, with couples shunning one-bed apartments with too little space to work remotely, according to a report on the residential property market in the central Dublin district.

The report by estate agent Owen Reilly said rents have fallen on average 13 per cent in the docklands since March, and by even more at the upper end of the market.

Between March and April, 10 per cent of Owen Reilly’s tenants prematurely ended their tenancy and left the docklands to work remotely from their home country, mainly in continental Europe.

While the demand for short-term rentals fell, the report noted that the supply of long-term rental units more than doubled.

“This, combined with reduced demand due to lockdown measures and work from home initiatives, caused rents to fall steeply in the second and third quarters,” it said.

While rents stabilised in the fourth quarter with demand fuelled by returning technology workers, renewed lockdown measures since Christmas have seen many foreign employees postpone their return to Dublin.

“It was a challenging year for the docklands residential market with Covid-19 having a more profound impact on the docklands than any other location in Dublin,” the report said.

“As the pandemic took hold, most companies initiated work from home policies until further notice. At this time, it is unclear when large offices will open again,” it said.

Despite this, the report said the outlook for residential property in the docklands was still strong with the workforce expected to double in the next two years to at least 80,000.

Salesforce’s new European headquarters at Spencer Dock, currently under construction, will accommodate in the region of 3,000 workers.

“Given this, the demand for PRS apartments in the docklands will be strong,” it said.

Despite the disruption from Covid, 2020 saw two new schemes launch in the docklands in the private rental sector (PRS) at Quayside Quarter (268 units) on North Wall Quay and Ropemaker Place (56 units) at Grand Canal Dock.

It said there were only a handful of transactions in the €700,000-plus market, where properties were slow to sell while selling times overall were longer at 13.5 weeks compared to 11 weeks in 2019.