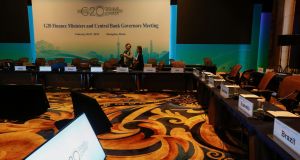 The room in Shanghai where this weekend’s G20 meeting will be held. Photograph: AP

Worries about Chinese economic growth and its impact on the world economy will be on everybody’s minds as finance ministers and central bankers from the G20 group of nations meet in Shanghai for a weekend summit.

In 2009, the G20 meeting in Shanghai came up with a China-driven infrastructure investment programme that helped prop up a seriously ailing global economy, but the situation is vastly different now.

The Shanghai Stock Exchange closed down more than 6 per cent ahead of the meeting on Friday and Saturday, as government leaders and top industry figures pledged more openness and coordination in dealing with slower economic growth, and called for more global cooperation to combat market turmoil.

China reported economic growth of 6.9 per cent for 2015, its weakest level in 25 years, although still an impressive clip.

But there has been widespread criticism of the opaque way China has handled challenges to its currency and stock markets, and while a lack of transparency was tolerated when the rewards were high, money is flowing out of China as investors seek higher returns elsewhere, prompting fears of destabilisation in the world’s second biggest economy.

There are growing calls for China to devalue its yuan currency, but also concerns that a rapid devaluation could destabilise the economy.

This particular issue is unlikely to be addressed at the G20 meeting, at least not in public. Finance minister Lou Jiwei described a proposal to devalue the yuan as only “media hype”.

“There isn’t such an item on the agenda,” Mr Lou was quoted as saying in the China Daily newspaper.

Vice finance minister Zhu Guangyao told a conference ahead of the summit that China would seek to keep the exchange rate stable while maintaining its current “managed float” regime.

“We do recognise the risk the global economy faces,” Mr Zhu said.

The question remains how much control China will be able to retain over how the economy and its control of domestic markets are viewed.

US treasury secretary Jack Lew told the Wall Street Journal: “You have to communicate clearly publicly or it will be interpreted for you.”

Mr Lew said China needed to make it crystal clear there was no major devaluation in the offing.

The yuan has been under significant pressure in recent weeks, with international investors such as George Soros suggesting plans to short-sell the currency and saying a hard landing for the Chinese economy was “practically unavoidable”.

The Chinese media responded by calling Mr Soros a “robber baron” and hailing China’s strong foreign reserves as a sturdy bulwark against his assaults.

The People’s Bank of China (PBoC) devalued the yuan in August, arguing it would allow the market to reset at its natural level. But investors have continued to move out of the currency since and the exchange rate has slid further.

Premier Li Keqiang, who is the Communist Party leader in charge of the economy, insisted that China was experienced in dealing with slowing economic growth.

“We will continue to implement a proactive fiscal policy and prudent monetary policy, as well as an innovation-driven development strategy,” Mr Li said at a meeting with World Bank president Jim Yong-kim in Beijing.

The absolute priority for the ruling Communist Party is to balance slowing economic expansion with the need to create jobs and fend off potential social unrest.

Beijing argues that it is introducing reforms, and that growth rates, while slower than the double-digit percentage expansion of recent decades, are robust and that China is transforming from a heavy industry-focused economy into a service-driven one.

A report this week by the International Monetary Fund (IMF) called for a coordinated stimulus programme to support a slowing global economy.