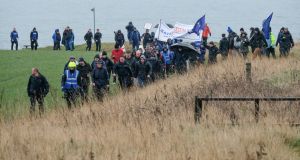 Image of the week: The long goodbye

The world has too many close-ups of Nigel Farage but the former Ukip leader is in this picture if you squint hard enough, standing next to a bloke in a red hoodie checking his phone. Farage made a cameo appearance during the first leg of a 14-stage March to Leave campaign organised by the Leave Means Leave protest group who don’t seem to care about such niceties as soft borders, trade deals or the economy.

Here, hiking between Sunderland and Hartlepool in really rubbish weather, protesters were untroubled by the symbolic presence of the cliff-edge behind them as they demonstrated their stomping great discontent with the way Brexit has been handled. Farage was soon in the pub recovering with a man-of-the-people pint.

10 Half of Dublin pubs now stock more than 10 different types of gin, according to a survey by the Licensed Vintners Association.

5% Only one in 20 Dublin pubs does not feature any kind of music, the same survey revealed.

33% In a third of Dublin pubs, credit and debit cards now account for more than half of all transactions.

Getting to know: Devin Nunes

Republican congressman Devin Nunes is a big fan of Donald Trump but not so big a fan of Trump’s favourite social network. Nunes is suing Twitter over two parody accounts – @DevinNunesMom and @DevinCow – saying they defamed him and that Twitter let them do so. Nunes is also a believer in the “shadow banning” conspiracy theory that falsely claims Twitter suppresses politically conservative tweets. As an example of the alleged defamation, the 40-page lawsuit offers up an illustration of Nunes at the end of a human centipede headed by Trump.

The @DevinNunesMom account – “Are you trying to obstruct a federal investigation again? You come home this instant or no more Minecraft!” – has since been suspended. Alas for Nunes, @DevinCow is now on track to exceed his own number of followers. “Twitter conspiracy meeting tonight. Don’t tell Devin,” reads the sign on its header picture.

Paris, Singapore and Hong Kong tied for first place in the Economist Intelligence Unit’s rundown of cities with the highest cost of living for international workers, but which cities are climbing up its rankings?

1. Nouméa Located in the French territory of New Caledonia in the south Pacific, the cost of living in Nouméa is high due to a lack of competition and dominance of a small number of companies. It is the 20th most expensive city, up 33 places.

2. Sofia The Bulgarian capital rose 29 places to joint 90th place as prices for groceries are “beginning to converge with west European destinations” in anticipation of Bulgaria joining the euro.

3. Casablanca Not quite as expensive as Paris, but its gin joints are a bit pricier now, with the result that the Moroccan city has moved up 20 places to 92nd, tying with…

4. Muscat In joint 92nd, the capital of Oman has risen 15 places and the bad news is that there’s a new “sin tax” on alcohol, cigarettes and soft drinks on the way.

5. Abu Dhabi Currently the 49th most expensive city in the world, it is up 13 places on the last ranking, with more heights to scale.