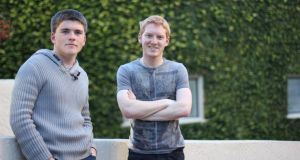 John and Patrick Collison, co-founders of Stripe, outside their offices in Palo Alto, California.

Five young Irishmen have been listed in the influential Forbes ‘30 under 30’ lists of people to watch.

“These founders and funders, brand builders and do-gooders aren’t waiting around for a proper career bump up the establishment ladder. Their ambitions are way bigger — and perfectly suited to the dynamic, entrepreneurial, and impatient digital world they grew up in,” Forbes said.

Limerick brothers John and Patrick Collison set up online payments firm Stripe to make online payments easier in a market where options for online sellers are limited. Backed by Y Combinator, and having raised $50 million, the company processes billions of dollars a year for thousands of companies in 11 countries.

All five members of One Direction made the list, which is one of the most famous in business. The band continues to cash in on the road, grossing over $1 million per city en route to $42 million in earnings over the past year.

Northern Irish golfer Rory McIlroy, who has landed sponsorships with Nike, Bose and Swiss watch maker Omega, was also on the list.

“Even in a down year, he’s a face of the sport,” Forbes said.

Terry Cavanagh of gaming company Distractionware also made the list. The Monaghan-born entrepreneur is a prolific designer of experimental games like At A Distance. His 2012 release Super Hexagon, an arcade-style action game, was a finalist for the Best Design award at the Independent Games Festival, audience choice winner at Fantastic Arcade, and a finalist for Game of the Year on Apple’s App Store.

Some household names like actresses Olivia Wilde and Jennifer Lawrence, Tumblr’s David Karp and tennis player Maria Sharapova were also on the list.