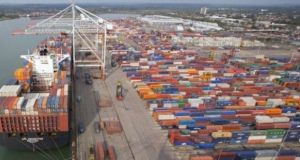 Exports jumped to their highest level on record last year, rising by 15 per cent to €140 billion.

New figures from the Central Statistics Office (CSO) show imports reached a new high too, increasing by 14 per cent to €90.2 billion compared with the previous year.

The statistics also reveal that trade exports to Britain declined in 2018 as shipments to the European Union rose.

According to the data, a third of all exports recorded in 2018 were of medical and pharmaceutical goods. Exports of these good totalled €46.3 billion, up 31 per cent or €10.9 billion on the prior year.

In terms of imports, shipments of transport equipment, which include aircraft, rose by 22 per cent last year to €20.7 billion, equivalent to 23 per cent of total imports into the Republic.

Aircraft feature heavily in Irish trade figures because of the concentration of aircraft leasing activity in the Republic, with the strong presence of multinational pharma companines reflected in the figures for pharmaceutical goods.

The European Union accounted for half of all exports last year. Goods worth €71 billion were shipped to the EU during 2018, a 13 per cent increase on the prior year.

Exports to non-EU countries were valued at €69,851 million, a 17 per cent increase on the previous year. The US was the largest non-EU destination, accounting for 28 per cent of total exports.

During December, total exports rose by 9 per cent to €13.3 billion, according to preliminary figures. The value of imports meanwhile increased by 14 per cent to €1.08 billion. This means the trade suprlus for the month rose to €4.6 billion.

The value of exports increased by over €2 billion or 21 per cent in the final month of the year to €12.2 billion, with medical and pharma goods accounting for 26 per cent of all exports made during December. Exports of such goods rose by €533 million or 21 per cent to €3.15 billion versus the same month 2017.

Exports of organic chemicals rose 44 per cent to €2.7 billion in December versus the same month a year earlier while exports of electrical machinery and appliances jumped 28 per cent to €552 million.

Imports grew 23 per cent in the final month of 2018 to €8.6 billion with transport equipment accounting for 38 per cent of the total at €3.2 billion.

Car imports were up 12 per cent or €51 million to €473 million during December while organic chemical imports declined by 48 per cent to €296 million.

According to CSO, exports to Britain accounted for 11 per cent of all exports in the month with the biggest categories being shipments of chemicals and food and live animals.