Brain drain in Northern Ireland much worse than in the Republic 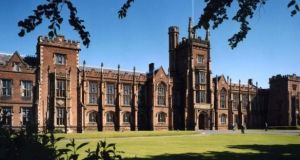 Queen’s University Belfast. In recent years, the impact of emigration on Northern Irish society and the economy has been more negative than in the Republic

Emigration has played a huge role in moulding the Republic, affecting all aspects of society and the economy. For most of the last century, as many bright and innovative young people left, its impact was generally unfavourable. In recent decades, however, the pattern has been rather different. While many still go, most of them come back, often enriched by their experience abroad.

Northern Ireland has also been affected by its experience of emigration but, in more recent years, the impact on Northern Irish society and the economy has been more negative than in the South.

In the late 1980s, the Republic experienced a brain drain as many graduates left to find better opportunities abroad. Fears of long-term harm proved unfounded as most of them returned. In contrast, Northern Ireland has a continuing outflow of young people who never come back.

While immigrants from elsewhere replenish the numbers, the net impact of these flows is that Northern Ireland ends up with fewer people who have third-level qualifications.

By contrast, over-65s from the North living in Britain accounted for just over 20 per cent of over-65s living in the North. Thus the outflow from Northern Ireland in the post-war decades had been much less, reflecting the North’s superior economic performance in the 1950s.

However, this picture of lower migration from the North is reversed when we look at younger age groups. Those aged 25-50, born in Northern Ireland, who were living in Britain in 2011, constituted 15 per cent of their home-based peers, compared to an equivalent figure of 6 per cent from the Republic. Thus in recent years the North has experienced a much larger permanent outflow to Britain than the South.

Of particular concern is the high outflow from the North of those aged 15-24, with 10 per cent of the Northern-born cohort living in Britain. This reflects the fact that many young people choose to study in Britain after leaving school. This is especially significant for those teenagers from a unionist background.

Scotland is the destination for one in four of these young people, which may reflect historic ties between the North and Scotland or, more pragmatically, the lower costs of university education compared to England.

Experience suggests that those who take their undergraduate degree abroad are less likely to return than those who go to a local university. In terms of economic growth, and of the wider society, emigrating early tends to remove the most skilled, and they are then not around to contribute to the society or its politics.

In the South, most young people do their undergraduate degree at home. Some may then migrate for work or further study. But, given their first degree is in Ireland, and that they have as a result established ties of friendship, family and community here, they are much more likely to return after a spell abroad.

The result of differential emigration is that, in the North, only a third of those in their early 30s are graduates, compared to 43 per cent in the Republic and a similar figure for mainland Britain. In addition, Northern Ireland also has a significantly higher proportion of the population in their 30s who did not complete second level.

The lower level of education in Northern Ireland, compounded by permanent outward migration of Northern-born graduates, has had a serious negative impact on that economy.

It has also contributed to a society, which is now marked by political stagnation, with no end in sight to re-establishing the Assembly.