Planet Business: Meet the family behind an opioid blamed for a US epidemic 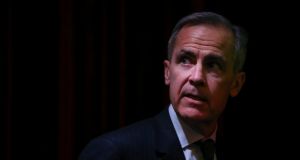 Image of the week: Carney’s caution

Governor of the Bank of England Mark Carney, as certain MPs and indeed sections of the British press like to remind him, is not British but Canadian, and here the expression he wears is very much one of “Who are you people and why are you self-sabotaging everything?” Carney was giving a speech in London on Tuesday in which he warned that a no-deal Brexit would create a nasty economic shock at a time when the Chinese economy was slowing down and trade tensions rising. If countries “turn inwards”, it will undercut growth and prosperity for all. Brexit “could go quite badly”, he suggested in blunt terms, not that anything he has said to date on “the fog of Brexit” appears to have much influence on Westminster’s go-slow, deadline-dancing so far.

Revenue collected by Call of Duty games publisher Activision Blizzard in 2018, a record for the company.

Percentage of its workforce at Activision Blizzard, which also owns Candy Crush Saga maker King, that it is now laying off – some 800 people – because its revenues, despite being “the best in our history”, according to boss Bobby Kotick, did not “realise our full potential”.

Number of weeks for which Activision Blizzard made its game Destiny 2: Forsaken free to download after disappointing sales.

Getting to know: The Sackler family

The Sackler family are, according to the New Yorker, “the family that built an empire of pain”. The descendants of brothers Mortimer and Raymond Sackler have amassed fortunes thanks to their shares in Purdue Pharma, the US company that makes and markets OxyContin, a strong opioid known to be highly addictive – although Purdue funded research to say the opposite. In 2007 Purdue and three executives pleaded guilty to criminal charges over misleading regulators, doctors and patients over OxyContin. None of the Sacklers were named in that case, but several family members are now facing legal actions over their alleged role in deceptive marketing that contributed to an opioid epidemic in the US. Elizabeth Sackler, the descendant of an estranged third branch of the family, has called her relatives’ wealth “morally abhorrent”.

Kara Swisher, co-founder of US tech site Recode, interviewed Twitter chief executive Jack Dorsey in a Twitter Q&A format this week, and it’s safe to say the results were a bit of a car crash for Dorsey. Here are five of the lowlights.

1. Tech responsibility: Swisher wanted to know what grade Dorsey would give himself on the subject. “C”, he suggested, which some might say is more generous than humble.

2. Everything is wrong: Dorsey said Twitter would concentrate on fixing “where abuse happens the most: replies, mentions, search and trends” – so all of Twitter then.

3. Musk madness: Asked who was “the most exciting influential” on Twitter, Dorsey said he liked how Tesla boss Elon Musk used the platform, which to recap involves smearing people, triggering defamation cases and making jokes that lead to large regulatory fines.

4. Breaks and purges: Asked about why so many people say they feel better after leaving Twitter, Dorsey said it depressed him when people weren’t “feeling empowered” by the site and he was inspired to “figure it out”.

5. Format confession: Swisher wrapped it up by saying the Twitter conversation had been hard for people to follow and they should have done a podcast instead. Dorsey agrees. “Need to make this feel a lot more cohesive and easier to follow. Was extremely challenging.”