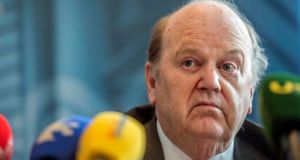 Minister for Finance Michael Noonan: Revenue collected €7.5bn for the first two months of the year, 1.6% ahead of profile

Exchequer returns for February show the Government’s finances remain on target for the year despite a slight fall-off in income tax receipts.

The latest set of returns, published on Thursday by the Department of Finance, show Revenue collected €7.5 billion for the first two months of the year, 1.6 per cent or €44 million ahead of profile.

However, income tax, the Government’s main tax head, undershot the department’s target by nearly 4 per cent coming in at €3.1 billion. The monthly income tax take for February was 6 per cent off profile and down on last year’s figure. The slightly weaker trend runs counter to the healthy employment growth evidenced in other indicators.

Corporation tax also underperformed, coming in 4.7 per cent below target at €272 million, albeit it was up nearly 10 per cent on an annual basis.

The returns show €2.8 billion was collected in VAT, which was €212 million or 8 per cent above profile, despite February being a non-VAT month.

Excise duty was 7.3 per cent below target at €812 million. This was put down to the front-loading of receipts on tobacco products ahead of the implementation of plain packaging.

The latest returns generated an exchequer surplus for the period of €587 million compared to a surplus of €310 million for the same period last year. The department said the €277 million improvement was primarily down to an improved tax take.

At this early stage of the year the public finances are already €130 million ahead of the Government’s €1.2 billion deficit target for 2017, which equates to 0.5 per cent of gross domestic product (GDP). Allied Irish Bank’s proposed dividend of €250 million, announced on Thursday along with its annual results, will also help reduce the deficit.

Exchequer debt servicing costs to were €446 million, representing a marginal year-on-year increase of €23 million or 5.5 per cent.

He said the highlight so far was the performance of VAT, which was nearly 17 per cent up on the same period last year.

Mr Mac Coille also played down the underperformance in income tax, suggesting it was too early to discern a clear trend, especially given the fall in the unemployment rate.