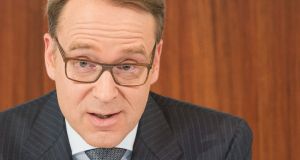 Jens Weidmann: The return of inflation to Germany may allow the Bundesbank president to push for a reduction in the ESB’s bond-buying programme. Photograph: Susann Prautsch/AFP/Getty Images

German inflation probably picked up in February, surpassing the European Central Bank’s target of a rate just under 2 per cent for the first time in more than four years, regional data released on Wednesday suggests.

With federal elections set for September, Germany’s inflation figures are likely to fuel debate about an end to the ECB’s loose monetary policy and when interest rates might rise.

Capital Economics analyst Jennifer McKeown said the state readings support the forecast, but German core inflation, which strips out volatile energy and food costs, was likely to remain weak in the coming months. “This should encourage the ECB to implement its asset purchases as planned,” she said.

The inflation rate for the entire euro zone is expected to rise to 2 per cent in February from 1.8 per cent in January, economists polled by Reuters said. Those figures are due on Thursday.

The ECB has slashed interest rates and adopted a bond-buying programme, worth €2.3 trillion, to pump money into the region’s economy.

A sustained rebound in German inflation would give Bundesbank president and ECB rate setter Jens Weidmann more grounds to argue for a reduction in the central bank’s bond-buying programme, a scheme he has often criticised.

The German central bank has warned that homes in large German cities are 15-30 per cent overpriced, a message that stoked further fears about the side effects of the ECB’s stimulus.