The Co-op bank was known for prudence – until word came of its £1.8bn deficit 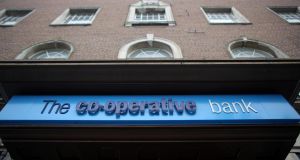 As a mutual organisation, owned by its members and managed for their benefit, the Co-operative is supposed to be different from other banks.

As a mutual organisation, owned by its members and managed for their benefit, the Co-operative is supposed to be different from other banks.

So it seemed in the early years of the financial crisis – as Royal Bank of Scotland, HBOS, Barclays et al paid the price for their reckless lending and toxic financial products, the Co-operative Bank sailed serenely on, apparently unaffected.

Known for its ethical invest- ment stance and all-round green credentials, the Co-op played an important role in lending to small businesses in its local communities.

Its 6.5 million customers basked in the security of know- ing their bank was not like all the rest and the Co-op was regularly held up as a model of traditional, prudent banking.

That reputation for prudence is now in tatters, however, after a series of shock disclosures over the past few weeks, culminating in news last week that it has frozen all lending to new small business customers.

Behind the drastic measure is an urgent need to repair its balance sheet after it emerged that the bank is sitting on a black hole of up to £1.8 billion.

But, given its business model, how did the bank get itself into the same mess as the rest of the industry and why has it taken so long for its problems to come to light? Those are questions that its board – and the regulators – will be called on to answer in the weeks and months ahead.

There has certainly been very little explanation from the bank so far; indeed, announcing Booker’s appointment on Monday, group chief executive Euan Sutherland (a former boss of DIY group Kingfisher who has no banking experience) made no reference to the crisis, simply saying the former HSBC man was “the ideal person” to lead the bank “at this important time in its history”. With his skills, Booker will take it to the “next stage of its development”– always assuming it survives as part of the Co-op Group, of course.

The first real sign of trouble came just two months ago, when the bank shocked the sector with news that it had lost £660 million from a mixture of bad loan losses, payment protection compensation and IT system write-downs. The loss dragged the wider Co-op group into the red to the tune of £600 million.

Despite the loss, the bank insisted it was going ahead with its plan to buy 632 branches from Lloyds, a deal that had already been under negotiation for two years. The ambitious move would have tripled its size, propelling Co-op into the big league of British banking.

A month later, it pulled out of the deal, citing the worsened economic outlook and increased burden of regulation in the financial sector.

The collapse of the deal was a major blow to the government’s plan to inject competition into the banking industry and a serious setback for the Co-op’s corporate ambitions.

Worse was to come just a few weeks later, however, when the Moody’s ratings agency issued a savage summary of the Co-op’s financial position.

Downgrading its debt rating a full six notches to “junk” status, the agency warned the bank could need external help (ie, a bailout) if it could not strengthen its balance sheet.

Moody’s highlighted moun- ting losses from property loans and the slow progress made by the group in integrating Britannia Building Society, which it took over three years ago. In the wake of the failed Lloyds deal, and the Moody’s report, the bank’s chief execut- ive, Barry Tootell stepped down with an undisclosed payoff.

The Co-op has dismissed suggestions that it will need a taxpayer bailout or that it will exit the banking business altogether. However there are fears among its members that the crisis at the bank will engulf the rest of its operations.

The new bank boss will need to make swift progress if there is to be any chance of restoring the 169-year-old mutual’s reputation for prudence and reliability.
Fiona Walsh writes for the Guardian in London