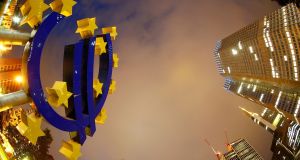 With euro-zone inflation still below its goal of just under 2 per cent, the ECB will continue to buy public and private debt through September 2018. Photograph: Kai Pfaffenbach/Reuters

Euro-area economic confidence surged to its highest in almost 17 years, reflecting an improved outlook for a region that not long ago was blighted by record joblessness and a double-dip recession.

The index of industry and consumer sentiment rose to 114 in October from a revised 113.1 the previous month, the European Commission in Brussels said on Monday. That’s the gauge’s fifth consecutive monthly increase and the strongest reading since January 2001. It compares with a median estimate of 113.3 in a Bloomberg survey.

After the past decade dealt the euro area two prolonged economic slumps, a sovereign debt crisis and an almost-exit of Greece from the single currency, the 19-nation region is experiencing a growth revival. Unemployment is declining and consumer spending, as well as corporate earnings and investment, are on the rise.

Better performances in countries from the United States and Canada to Russia and India have also buoyed that upswing.

“In big-picture terms we’re still in a period of above-trend growth,” said Nick Kounis, an economist at ABN Amro Bank NV in Amsterdam. “One of the things which has changed for the better in the last, say, six to nine months has been a marked improvement in the global growth backdrop, and that has been very important for Europe.”

The export-oriented manufacturing sector has been a beneficiary of the turnaround, with a purchasing managers’ index gaining in recent months. Companies in that branch took on staff at the fastest pace on record in October. Sentiment increased across all sectors, according to the European Commission.

The euro was little changed after the report and traded at $1.1633 on Monday morning. Data on Tuesday is expected to show the bloc’s economy expanded for the 18th consecutive quarter in the three months through September.

The unemployment rate is forecast to have fallen to 9 per cent last month, compared with a high of more than 12 per cent back in 2013. Germany, the region’s largest economy, is headed for its fastest annual expansion since 2011, and the better local and international dynamics have been reflected in company earnings.

As for Spain, which was particularly buffeted by job losses, unemployment fell to a nine-year low in the third quarter amid economic growth of 0.8 per cent, providing some good news for the government as it tries to get a grip on the political crisis in Catalonia. Still, economy minister Luis de Guindos said he’s anticipating a slowdown in the region that may have ripple effects for the broader Spanish economy.

European Central Bank president Mario Draghi took note of the euro area’s improved prospects last week, saying the region was “doing pretty well.” Yet, faster momentum has been slow to push up domestic cost pressures, and Draghi stressed that a “prudent” as well as “patient and persistent” approach toward exiting the quantitative-easing programme was warranted so as not to undermine the recovery.

With inflation still below its goal of just under 2 per cent, the ECB will continue to buy public and private debt through September 2018, albeit at half the current monthly rate of €60 billion, it announced on October 26th.

“Growth is growing and momentum is also growing and the labour market and everything is doing well,” Draghi told reporters after the decision. While data constituted grounds for confidence about the region’s prospects, “this confidence is also tempered by the fact that we know that all this process, it still relies very much on our monetary-policy support,” he said. – (Bloomberg)