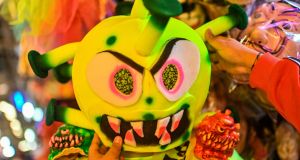 This year’s Halloween costume: the coronavirus itself. Photograph: Pedro Pardo/AFP

Image of the week: Corona-costume

Every year a select group of Halloween costumes goes viral, but this year the “in” choice is an actual virus. Yes, SARS-CoV-2, the strain of coronavirus that causes Covid-19, is being represented this year in the costume stakes despite being responsible for the cancellation of the very fancy dress parties and trick-or-treat parades where it might have flourished (in more ways than one). The particular coronavirus mask and suit shown here is being assembled on to a mannequin at a Halloween merchandise outlet at Sonora market in Mexico City, but handmade coronavirus costumes have been enlivening streets everywhere courtesy of creative craftspeople unperturbed by any accusations of bad taste. The rest of us will just have to wear our normal everyday masks.

Year-on-year rise in gross sales of Barbie, Mattel’s most famous doll, in the third quarter, in a sign that a more inclusive range of Barbies is paying off for the toy giant.

Barbie sales reached this value for the quarter, the highest in 17 years, as “slow play” toys came back in fashion. We all need friends in lockdown.

Net sales across Mattel were up this much year-on-year in the third quarter, helping to offset a decline in the first half of 2020 amid stalled production and retail uncertainty.

Getting to know: Bill Gross

Bill Gross (76) is best known – to date – for being the co-founder of investment managers Pimco. Judging by colourful recent reports of a legal dispute with his neighbours in Laguna Beach, California, the retired billionaire has been having an interesting pandemic. Gross and his partner, former professional tennis player Amy Schwartz, have fallen out with tech entrepreneur Mark Towfiq and his wife Carol Nakahara over a $1 million blue glass sculpture that Gross had installed last year. A protective pole and netting structure for the artwork is allegedly blocking Towfiq’s view from his home, with the ensuing quarrel somehow escalating to the point where Gross and Schwartz are being sued for harassment and inflicting emotional distress. The one-time “bond king” stands accused of blaring music at all hours in a campaign to make his neighbours drop their complaint – his audio torture of choice being the cheery theme song to 1960s US television series Gilligan’s Island.

It’s not just Cheers actress Kirstie Alley who has stuck with Donald Trump. These US business names still have at least one foot in his camp.

1. Linda McMahon. The former professional wrestling executive served as administrator of Trump’s small business administration before becoming a major fundraiser and donor in her own right.

2. Steve Schwarzman. The chief executive of private equity group Blackstone is the biggest Trump fan left on Wall Street, which doesn’t like the current White House occupant very much, and even he seems to be cooling in his support.

3. Larry Ellison. The Oracle co-founder organised a fundraiser for Trump’s re-election campaign earlier this year and is one of the president’s few friends in Silicon Valley.

4. Marc Rowan. The Apollo Global Management co-founder and his wife have remained among the dwindling ranks of Trump’s billionaire backers in recent months.

5. Timothy Mellon. The great-grandson of Mellon Bank founder Thomas Mellon, and heir to the Mellon banking fortune, once donated to a search to recover Amelia Earhart’s lost aircraft, which seems like a better use of his money.